Consisting of 34 works by 32 composers from 11 different countries, the Présence II double CD compilation represents a diversity of current electroacoustic practice. It is the second such compilation to be produced by PeP — the “arms length” production team of the CEC (Canadian Electroacoustic Community). The production quality on these discs is generally high, although on my copy, track one of disc one suffered from noticeable clipping artefacts.

Disc one begins with Jorge Antunes’ La beauté indiscrète d’une note violette (1995) which uses sustained tones punctuated by vocal events to articulate a short study on the color violet, organised according to the composers Chromophonic theory. Alastair Bannerman’s In th’air or th’earth (1997-99) is a peaceful flow of sustained enharmonic gestures peppered with processed voices and spectral implosions. Points of No Return (1997) by Chin-Chin Chen is a beautifully shaped series of interrupted tension building episodes articulated by a variety of processed percussive sounds. Peter Batchelor writes of his ballistic rollercoaster ride Velocity (1996): “this piece involves an exploration of ways in which speed (or, conversely, stagnancy) might be implied through the use of sound.”

jef chippewa’s DUO (1997-98) explores a “correspondence of timbre and articulation” between the alto saxophone and analog synthetic sounds, Jef continues: “instead of a lethargic experience of linear continuity, and establishment of familiarity on a superficial level.” Ian Chuprun makes effective use of linear continuity in To many moments passed (1998), at one point a node of sustained tones warps through time, and erupts into an amazing pulsating rhythm, somewhat reminiscent of an idling Harley Davidson motorcycle. This is followed by Chuprun’s poignant etude Reading Allowed (PA 11) (1998) which processes the following spoken phrases “How do you want this read?” – “Am I supposed to read this like a child?” – “Let’s try this out here.”

In Zipper Music II (1998) Gordon Fitzell explores the musical potential of zipper sounds in an active dialog of dynamic spatial gestures. Martin Alejandro Fumarola’s ARGOS (1988) and SET IN (1994) are slowly unfolding journeys though a world of sustained tones, synthetic bells and in the case of ARGOS, unusual modulated bird call like sounds. Éphémere (1997) by Yves Gigon makes subtle use of processing and deep resonant reverberation to treat recordings of the percussed ‘Primordium’ sound sculpture.

I found the tracks on Présence II containing only mixed or minimally processed, recorded sound to provide an excellent contrast to the dense spectral masses of the more synthetic works. Steve Bradley’s fowl melody to trot combines domestic histrionics, french voice over and a variety of concréte hummings and tappings to address “the challenge of learning French growing up in a mediated psychic society.” Thomas Gerwin’s 6 Aphorisms (1998) presents a series of environmental snapshots, as does Pascale Trudel’s Ce n’est pas ici (1999.) Barbara Golden’s Whipping the Boys (1981-99) overlays pulsing analog tones with an informal discussion of recreational disciplinary activities. Spirit Wheels: Journey (part 1 of a puppet opera) (1997) by sylvi macCormac is an ethereal collage of voices, penny whistle, bells and bowed drones which I found to be one of the most striking works on these discs.

Disc two contains 22 tracks, ten of which are excerpts or movements taken from larger works, in many cases I would have liked to hear the full compositions – in some cases the pieces are available in full on other releases. Few of the tracks on disk two exceed four minutes in duration, some are edited in such a way that it’s easy to imagine that you are listening to a single composition – at least that was my initial experience of the first five tracks of disc 2. The disc begins with A Palaver with Procrustes (1998) by Martin Gotfrit, which consists of a variety of synthetic tones modulated at different rates according to the Fibonacci series. Otto Joachim’s Three Electronic Sketches (1984) taken from a larger cycle of 7 are interesting sonic scenes rendered using randomly modulated voltage controlled synthesisers. The sequence of analogesque tracks concludes with Suk Jun Kim’s structured composition Sudden Cry (1998).

Following sylvi macCormac’s previously mentioned Spirit Wheels: Journey (part 1 of a puppet opera), is Kevin MacLeod’s pacific (1998) in which pulsey and percussive textures slowly fade in and out to form a dialog. Climb to Camp One (1989) by Diana McIntosh is a slow performance from the inside of a piano – climbing equipment is used to percuss the piano’s body and excite its strings. Gritty pulse-like gestures articulate Dugal McKinnon’s Horizont im Ohr (1998), after which Adrian Moore’s Soundbodies: Bodypart (1998) congeals into a pulsating mass of vocal fragments, percussion and fast, syncopated melodies.

In summary, this is a mammoth compilation of contemporary electroacoustic music. A large number of styles are represented, and the quality of the works presented is excellent. If you want to hear what’s been happening recently in electroacoustic studios around the globe, go grab yourself a copy of Présence II. 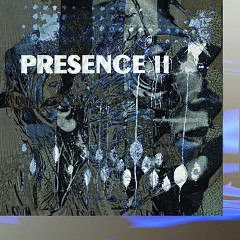