Duguay participated in 1985 in a radiophonic project called Golgot(h)a, a composition by Walter Boudreau. Let’s face Atlantide first. The texts used for those ideas are not at all noticeable in the music any more, but are completely transformed into the music. In this way they became dissolved by the musical concept. The overall atmosphere is one of a going back into a strange world, which starts from a chaotic but exotic structure, until it finds its peace in it.

The ideas behind the project came forth from all collected readings from Edgar Cayce which referred to the pre-existence of Atlantis. These readings all warned us in a way not to be lead by power once more and not to fall in self-destructive one-mindedness thinking any more that can lead to a pseudocommunal system that give rise to so many selfdefensing mechanisms that the world itself can get into danger by it.

The piece was dedicated to Charles Berlitz, author of books on Atlantis, and Jacques Boucher, and was commissioned by Société Radio-Canada. It received the special Jury Price in the Prix Italia in 1985.

The second piece is based upon inspiration by the Golgotha “as the representation of the drama of a human being confronted with the ineluctable. This long tunnel, of total darkness is a terrible funaral march of a man condemned to a horrible ordeal: the crucifiction.” Unfortunatly this experience is done with many destructive tones and atmospheres, where the purity of the soul in the middle that might even have found its inner piece within its desperate situation has not been expressed or even thought over. In that way it is indeed the confrontation of a common human being in this situation, facing hell directly in all its possible reflections. But even then I can’t believe in such an approach, bringing in mind some Italian horror movies where even the sadest and scariest moments contained some beauty.

OK. Let’s face this cruelty then. Destructive magical words (with amplified voice into horror), obtruded blasphemous trumpets spread their abuse to the unbearable. In my life I heard many contemporary compositions (Stockhausen, Xenakis, Ligeti…), difficult Free Jazz… but within what I heard this piece has too much destructive power in it. There’s no light in it. It truly is the total darkness. A destructive power towards the inner self. It’s not even a power that can cross that border or stand for itself on its own. This second piece received the Prix Paul Gibson in 1991 from the Communauté des Radios Publiques de Langue Française. 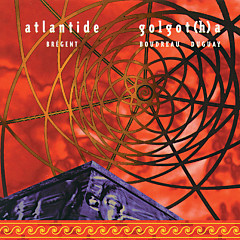