Reviewing compilations is just something I don’t like very much. Not in the limited space each release gets within Vital Weekly. Perhaps one could write lengthy essays about various compilations, and this would perhaps be one. ZKM stands for Zentrum fur Kunst & Technology in Karlsruhe, a prestigious art and music centre. They invited a bunch of Canadian composers “to feature the outstanding creativity of Canadian electroacoustic music and to investigate the trends of its acoustmatics and soundscape composition.” We come across here some old masters like Francis Dhomont (who has a very nice piece based on spoken text of Franz Kafka), Robert Normandeau and Hildegard Westerkamp, along with pieces by Nicolas Bernier (the young man in this lot I believe), Darren Copeland, Louis Dufort, Gilles Gobeil and Barry Truax. The shortest piece(s) are around fifteen minutes, the longest almost thirty-five. Various deal with voices in German or in general. All presented on a DVD. So far the basics. The music is probably just about anything you would expect from an empreintes DIGITALes release. Heavily computer processed electroacoustics sounds. Time stretching, granular synthesis and such like. Sounds tumbling over each other, rolling in and out, nearby and far away. The best pieces are those which add something extra, like spoken word. The spoken words of Burroughs in Bernier’s piece, the Dufort piece or the aforementioned Dhomont piece. The Copeland piece is a a bit too long for me. It’s a long compilation, which has some great music, but also no real stand out pieces, I think. Surely nice enough. 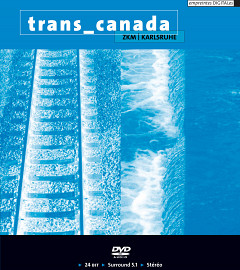 trans_canada
It’s a long compilation, which has some great music…