In 2000, crossing the psychological barrier of 50 titles in its catalogue, the Montréal electroacoustic label empreintes DIGITALes felt it was time to put together a sampler. eXcitations contains 22 excerpts of longer pieces. Now, tape music is a genre hard to approach from a newcomer point of view. The idea of providing a handful of examples that may lead the listener to some of the complete works is nice, but presenting short excerpts (none over three minutes) without any contextual notes, while staying true to the artist’s intent is another thing. eXcitations does a good, if not fantastic job. Key artists include: Robert Normandeau, Paul Dolden, Gilles Gobeil, Yves Daoust (Canada), Christian Calon, Michel Chion (France), Jonty Harrison, and Adrian Moore (UK). Some snippets are too short to give a meaningful idea of the composer’s style and interest (even Gobeil’s 3-minute long Associations libres has been cut back to 1:48) and one can only stare in disbelief at the selection of an excerpt from Espace/Escape to represent Francis Dhomont, while something from Forêt profonde would have been a lot catchier for the (more) general public. The total duration was kept barely over 45 minutes, which makes this sampler heavy in contents but easy to digest. A final 50 second cut presents flash images from every track, just to remind the listener of the wide variety of sounds he has absorbed. 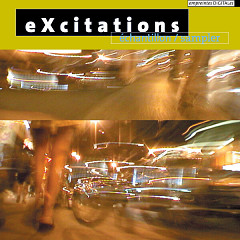 eXcitations
eXcitations does a good, if not fantastic job.