A 2-CD set, Délirantes culled for the first time Sergio Barroso’s best electroacoustic works into a comprehensive and easily available package. The nine works included were created between 1982 and 1995 and all newly recorded for this album. The spotlight remains mostly on the Cuban-born (now living in Canada) composer’s mixed electroacoustic works (for instrument and tape), especially the ones he wrote to be performed with a keyboard controller. These are often the most captivating pieces, as the listener can have a hard time trying to guess what had been fixed on tape and what was performed “live.” La Fiesta, which opens disc 1, and Charangas Delirantes, closing it, makes very good examples of this technique, They are both very festive and highly intricate. Crónicas de Ultrasueño is the only piece involving two instrumentalists (Barroso on keyboard controller and León Biriotti on oboe). It flows nicely but is no match for Viejas Voces featuring Laura Wilcox on viola or En Febrero Mueren las Flores with Adele Armin on Raad violin, an electroacoustic string instrument. The latter piece is alone worth the album: dense, rich, evocative, and tinged by a subtle Latin-American color that gives Barroso’s music its charm and originality. In regards to the composer’s origins, the tape piece Tablao, with its Flamenco-style hand-clapping, remains his strongest statement. Recommended. 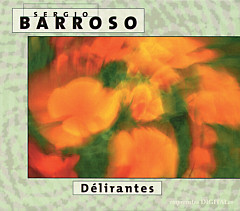 Délirantes
… dense, rich, evocative, and tinged by a subtle Latin-American color that gives Barroso’s music its charm and originality.