L’oreille voit (“The Ear Sees”) was Randall Smith’s first CD. Released in 1994, it gathers works created between 1988 and 1994. His constructions include a lot of movement, something that translates into the titles of works like La volière (“The Aviary”), Ruptures (“Breaks”), and Counterblast. This sense of movement gives life to the compositions in a way similar to what can be found in Francis Dhomont’s works: ample, calculated gestures of swirls and crescendos that lead somewhere (as opposed to Gilles Gobeil’s escalators that stop in their tracks). L’oreille voit begins with the composer’s recently finished La volière, where the human voice is used to simulate bird sounds. The wide dynamics and intriguing sources make for a fascinating listening experience. Then we gradually move back in time down to the 1988 The Face of the Waters, which paradoxically contains anything but water sounds. Very playful, it imitates water or conveys the idea of it by using a sonic vocabulary reminiscent of the candor that marked the early days of musique concrète (Pierre Henry’s early pieces, particularly): bedsprings, glasses, light bulbs, squeaky doors, etc. Smith’s subsequent works, especially the ones for tape and instrument, will tend to be denser and more satisfying, but this first crop reveals a composer who, although remaining firmly anchored in academic electroacoustics, eschews its too frequent pretentiousness and approches the art form with innocence and the intention to have fun. 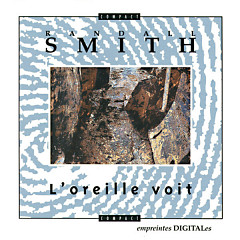 L’oreille voit
… approches the art form with innocence and the intention to have fun.