Ordinarily, I would say that an album is either ambient or it isn’t. And yet that there are lengthy passages on Nicolas Bernier’s usure.paysage, a detailed and adventurous exploration of musique concrete, that are without doubt the most ambient stretches of ‘sound’ I have ever heard recorded.

It’s entirely fitting that Bernier should describe himself — and be described by others — as a ‘sound artist’: he doesn’t play instruments or compose musical pieces in the conventional sense: he forges sculptures from the air — sometimes quite literally, collating and collaging found sounds and field recordings in combination with his own electronic creations.

It’s all executed with incredible sensitivity, and despite being a ‘quiet’ record, Bernier exploits a remarkable dynamic range to remarkable effect. Clattering, creaking, crunching, echoing footsteps and objects colliding forcefully break the near-silence. For example, Les chambres de l’atelier is for the most part quiet, so quiet in fact as to be barely there, leaving the listener picking out sounds from the room or the faint mains hum. It’s strangely engaging, but then when sounds suddenly burst from nowhere, the effect is startling.

If good photography is all about contrast and depth of field rather than obeying the age-old rules of composition, then usure.paysage is the audio equivalent: it’s a truly striking record, and one that demands real focus to obtain the maximum effect. 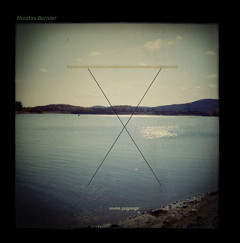 usure.paysage
… it’s a truly striking record, and one that demands real focus to obtain the maximum effect.