There has always been a certain lightness to Roxanne Turcotte’s works, a lightness seldom experienced in acousmatic music. Désordres, her third album for empreintes DIGITALes, features two hours of works composed between 2003 and 2008. Except for one piece (Sous écoute!, 10 minutes), everything here is either short or made of short movements. Just because her ideas are exposed in short durations doesn’t mean her artistic approach isn’t as “deep” as other empreintes DIGITALes composers. Simply, she adopts a more “popular” approach, i.e. often her message is more immediately tangible, sensible, and less mediated through culture. Just for that, Désordres makes an excellent initiation to sound art. However, that being said, paradoxically, by being so long (two hours, nine works), the album gets a bit incoherent, and this lack of cohesion is reflected in its longest work, the 41-minute suite Musée sonore, whose sequence of movements seems a bit haphazard. Released as a DVD-Audio with 5.1 and stereo mixes. 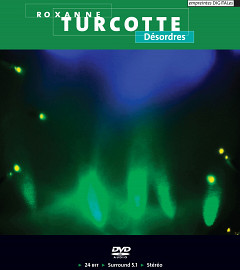