Yves Daoust has been dealing in sounds since very young years. He began taking piano lessons at the age of seven, and prepared the family piano at age sixteen, in 1962. He composed his first electronic work at 19, in 1965, for a gestural theatre work of an hour’s duration. He indicates that he found his electroacoustic style at IMEB, Bourges during an apprenticeship.

He officially entered the life of a composer in 1978, and has since produced about one work a year, in different disciplines. He names his major influences as Cage, Xenakis, Stockhausen, Kagel, Ferrari and Savouret, as well as some of the classical composers.

The first part of the triptych Bruits; Children’s Corner (1997) is a series of pictures centered, as Daoust says “around a relatively homogenous, diurnal sonic world”, like for instance street festivals, markets, machines and so on. He points out that the fragmentation procedure he utilizes creates a kind of “sonic smog”, which sometimes clears to reveal the clarity of certain sounds. After initial nursery rhymes of school children a total carnage of sounds, rolling at you in dense clusters, a prolonged high pitch ripple takes you into events suddenly lighting up like matches in the dark, showing, for a second, the faces of the people around you and the white walls of the houses, until the surroundings instantly fall back in silence/darkness again, just leaving memory marks in your brain tissue. It is impossible to make any sense at all of this, except that the whole piece could constitute a crude sample of Earth life picked up by some unknown recipient in a distant galaxy, pointing his devices of perception in our direction, receiving the influx from Earth civilization in chopped up and stellarly disturbed portions. At some very beautiful passages a distant jumble of bells constitute the backdrop for short, sharp, flaky short wave disturbances, mixing the tonal with the truly bruit. A continuous murmur bubbling below carries all kinds of minuscule sounds on its rough terrain. On high an airliner struggles across the canopy of the day, and here below chirping birds and playing children color time in happy garlands until it all is reduced to its constituents again, in a mincer of the light of day.

Nuit (1998) is the second part of Bruits. Daoust has a very clear view of what he is doing and achieving with his sounds. He says: “It is as though all the noises accumulated during the day continued, flattened, in the mind of the sleeper, reduced to a tinnitus that becomes confused with the sonic activity of nocturnal insects and with the very real, though distant, hum of the sleeping city.” Those phrases convince me that Yves Daoust thinks about electroacoustics in much the same way I experience this music; i.e. in a very poetical kind of way – and I suppose almost every composer of electroacoustics has to be a poet too, the way he bends shapes and sounds and auditory morphemes in and out of wack! Indeed the nocturnal layer constitutes a dreamy, very poetical sensation. The chirping of locusts and the squeaking high-pitch timbres of electronic devices join forces to produce this nocturnal machine-nature hybrid, taking you into secret, enchanted dominions of hearing, stemming from encounters with gleaming eyes and rustling unknowns in dark areas of the forest of night. The sounds roll and curl, spiral and ooze, meander and rush, in a spellbinding display of artistic bliss. Nothing is still; everything is on the move in this crazy world of dreams, where passing features remind you of people you’ve known or places you’ve been, and not least feeling you’ve felt – while other parts are nothing but alien and disturbing to your sense of security.

The final section of Bruits is Fête (“Party”) (2001). Daoust’s introductions are on the money as usual: Fête is a sort of allegro barbaro, a frenetic dance where music of the streets, clamoring voices, cries and whistles combine”. Yes, by now it would be obvious that Daoust likes to indulge in shattering, overpowering carnages of sound, which you just have to listen to again and again to be able to catch all the glimpse there are to catch of the sonic and associative developments. Jubilant crowds are taken on a tour-de-force into a layer just behind or below or maybe above the real world of events, like seeing the world through crystal and having your head stuck down into a bucket of water while being injected with some hallucinatory drug. Soon you’re astray, though “glimpses” really are what you catch of the real world, in such a chopped up and deviated way that you almost puke – so this is really good! You name it; we like it! Tickling grains of bell-like audio fall like dense precipitation all around, as heavily altered accordion tunes spin a thread of insanity around your last resources of clear thought… No way out of this – except maybe a brutal awakening from a runaway dream… (“Woke up, fell out of bed, dragged a comb across my head…”) Rhythmic cardiovascular beats bump and vibrate, and it all vanishes out on a thin, dissipating line of high pitch treble.

Impromptu (1995) is the only piece with an explicit instrumental idea, engaging Jacques Drouin [piano] and Lorraine Vaillancourt [keyboard]. The whole title is “Impromptu for piano, synthesizer, sampler and tape”. It cannot be helped; I have to quote this immensely eloquent Mr. Daoust on this piece too: “I completed this piece thanks to the help of Chopin, who for the occasion loaned me his Fantaisie-Impromptu in C-sharp minor for piano (op. 66). I have taken all material for this work from it, but also the agitation of the writing, the overly abundant energy, the tension.” It is a very seasick piano that opens the work. With gusting winds all around it, as the tones sort of reach us through watery waves of salty expanses. Unaltered speed freak pianism mingles with bent-out-of-shape tones, and a drone is heard – but sometimes not directly – as dump trucks of the soul are gearing up and gearing down somewhere in the vicinity. The blending of clean, clear and sparklingly present piano tones and all kinds of disturbed and wrenched, wretched sounds out of the poor instrument is splendidly arrived at, and here I can feel the influence of the Maestro, Mr. Stockhausen, in actual sound as well as in spirit and idea. Being a suspicious critic of the mixed-form bag, I nonetheless approve very much of Daoust’s adventure here, since, it seems, he uses the actual, acoustic instruments like would he any source of sound, thereby simply having them take on the apparition of “concrete sounds”; not primarily instrumental sounds. There is less of the frantic amassment of dense sounds here, and more of the poetic touch, careful in the detail, deeply in love with the over-arching gesture – and the musicality of this electroacoustic piece lands me in pure auditory pleasure! Prime time contemporary music! Hats off to Yves Daoust!

La Gamme (“The Scale”) (1981, revised 2000) is a kind of exercise on the part of Daoust, as he, as a dilettante to the electronic sound media stumbled through the venues of electronic possibility in 1981. Daoust calls this “techno music before its time”. The beginning is glassy, like long walls of shelves filled with bottles and wine glasses, screeching to each other about the blessings of fluid. A rubbery wind-down of events follows, like ropes of events closely knit together in a spiral grip of time… reminiscent of some Jean Schwarz adventures from the same time – but a lot of music sounded like this back then… and it still sounds fresh, electronically fresh. There’s nothing concrete about this beginning; it’s pure electronic music, electronically generated – but further into the work children’s voices in a school yard or a playground provide enough concretisms to secure even this piece in the secure grip of a musique concrète definition – and somebody practicing scales on the piano, overheard through a window facing the school yard, renders the piece a calm Paris suburb afternoon feeling, with no ill intents anywhere. Highly rhythmical progressions out of the 1981 electronic machinery talk directly to my memories of For Jon III by Lars-Gunnar Bodin of Norrtuna, Gnesta, Sweden; a veteran och veterans of electronic music. Sparkling clusters of edgy sounds spin down your auditory meatus like tumble weeds of Texas and Oklahoma down a gravel farm road during the Dust Bowl climate disaster…

The last entry is Ouverture (1989), which turns out to be a recount of the history of Canada in the making; a story that keeps its topicality through the struggle for independence in Quebec. The intrigue passes from 1760 and the end of New France, which falls into the hands of the British. It continues past 1793 with the decapitation of Louis XVI in France, and so it continues, in a narrated and sound-theatrical tour up the annals of history, though heavily blended with the sounds of modern Canada and an array of electroacoustic sound-bendings and sonic processes in the digital domain. Most of all this goes on in French, though English language is introduced inside the piece. This is just as much a radio play as a piece of electroacoustics. It’s very interesting and ear-catching, and like everything on this CD very well done, by an Yves Daoust who is a poet as well as a musician, and who manages to fascinate even an old hard case like myself… 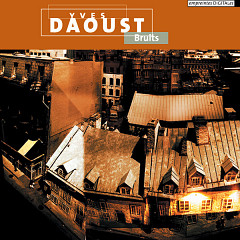 Bruits
… the poetic touch, careful in the detail, deeply in love with the over-arching gesture — and the musicality of this electroacoustic piece lands me in pure auditory pleasure!