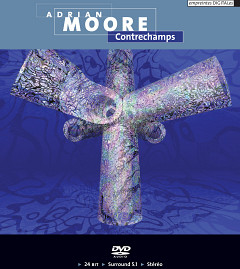 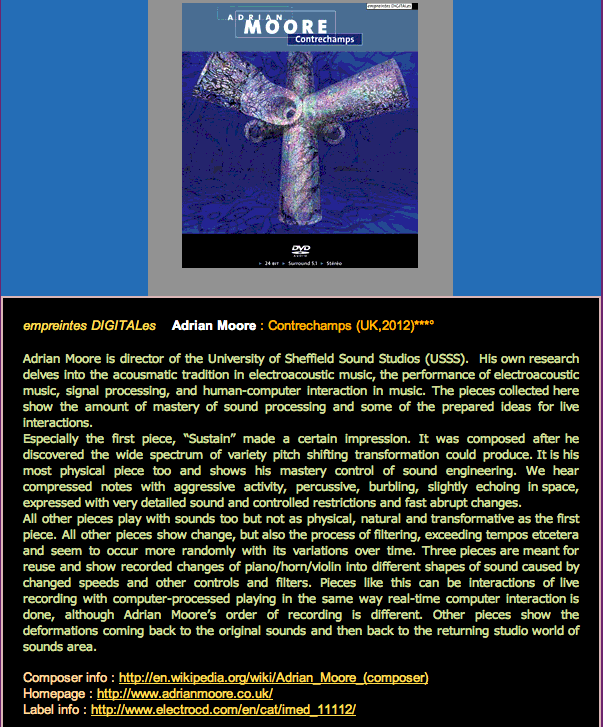 Adrian Moore is director of the University of Sheffield Sound Studios (USSS). His own research delves into the acousmatic tradition in electroacoustic music, the performance of electroacoustic music, signal processing, and human-computer interaction in music. The pieces collected here show the amount of mastery of sound processing and some of the prepared ideas for live interactions.

Especially the first piece, Sustain made a certain impression. It was composed after he discovered the wide spectrum of variety pitch shifting transformation could produce. It is his most physical piece too and shows his mastery control of sound engineering. We hear compressed notes with aggressive activity, percussive, burbling, slightly echoing in space, expressed with very detailed sound and controlled restrictions and fast abrupt changes.

All other pieces play with sounds too but not as physical, natural and transformative as the first piece. All other pieces show change, but also the process of filtering, exceeding tempos etcetera and seem to occur more randomly with its variations over time. Three pieces are meant for reuse and show recorded changes of piano / horn / violin into different shapes of sound caused by changed speeds and other controls and filters. Pieces like this can be interactions of live recording with computer-processed playing in the same way real-time computer interaction is done, although Adrian Moore’s order of recording is different. Other pieces show the deformations coming back to the original sounds and then back to the returning studio world of sounds area.

Contrechamps
… his most physical piece too and shows his mastery control of sound engineering.