Coming on the uncommon format of DVD-Audio to exploit the sonic cinematic quality of 5.1 surround, this second solo release by Montréal-based composer Monique Jean succeeds in enmeshing listeners by means of meticulously moulded reticulums whose intrinsically intricacy seems to have been unravelled in order to make every graduated shading more appraisable and enjoyable by the adoption of a sort of modular laying of sonic flagstones or, to reprise the title chosen by Monique, a series of grafts and insertions. After the immersive long-lasting first track Givre (French word for “hard rime,” the crystallization of water drops, caused by the so-called supercooling of fog), which renders this freezing process in an extraordinarily vivid way by means of electroacoustic weaponry, granular sounds, thin whishes an withering sonic entities, Monique elevates the concept, abridged in the title of her album (Greffes is the French word for grasps), by three impressive grasps of traditional acoustic instruments into acusmatic offshoots: Ricochet sounds like the tuning of a saxophone into a complicate system of dampers and shock absorbers, Misfit — my favorite sonic game — seems to represent the transplant of electronic and electric circuits and belt sanders within the body of an electric guitar while on low memory #3, Monique seems to trace the adventourous journey of clarinet sound over a route of tension pulleys, trip hammers and rusty wheelbarrows. On the final low memory #1, a windmill of viscous drones, woody burrs and metallic creaking gropes into electric gusts in a streamlined way which will make it easy to metabolize even for listeners, who are not accustomed to this kind of sonorities and are invited to explore the interesting sonic research of tensions and ruptures of sonic matter and the transmutation of concrete sounds into a poetic dimension by this composer. 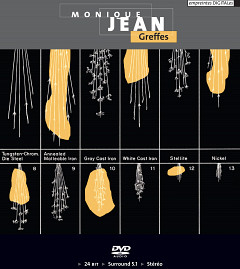