In 2001 the Canadian Electroacoustic Community (CEC) held its second Jeu de Temps/Times Play competition. Cache 2001 presents (in alphabetical order) the 11 top-scoring compositions presented by young emerging Canadian artists. Most of these composers have yet to step away from their academic studies to find their own voice, but this year’s crop is impressively good nonetheless. They all feature excellent production values and obvious sound wielding talent. Let’s point out a few highlights. Nicolas Basque’s Polyèdres is a rich tapestry of sounds organized in a complicated structure—very good and among the most mature works on this CD. Guillaume Coutu Dumont produces interesting sets of variations from a voice sample in Arianne Secret but it runs a bit long. The shimmering textures in Andrea Holtslander’s soundscaping Steam, Billow introduce a charming pause. Finally, Warren Spicer’s I’ll Distract Myself While You Cry Like a Boxer Tears, besides sporting the oddest title, presents a good amalgam of elongated sounds that recall Koji Asano’s works from 2000-2001. The other pieces have their moments and are satisfactory in general, but they lack that special something that would make them more than forgettable. Cache 2001 is not directly available on the market, but it was sent worldwide to radio stations and organizations supporting electroacoustic music. 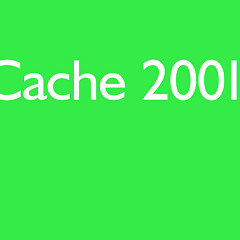