A composer of electroacoustic music, Denis Smalley came from a classical music background and followed the academic path. Since 1994 he is head of the Department of Music at City University (London, England). All his works (except a couple of early ones) are for tape or instrument and tape. He has albums out on empreintes DIGITALes, UEA Recordings and Effects Input. His music shares similarities with Jonty Harrison and the composers associated with BEAST.

Smalley was born 1946 in Nelson, New Zealand. He learned piano and organ at a young age. His first degree was a diploma in organ performance from the University of Canterbury (New Zealand). In his home country he premiered works for organ by Olivier Messiaen and Gyorgy Ligeti in the late 1960s. He taught music at Wellington College for three years before the French Government awarded him a grant in 1971. He studied in Messiaen’s composition class for a year at the Conservatoire de Paris, but he also took the electroacoustic music course dispensed at the time by the Groupe de recherches musicales (GRM). Musique concrète was a revelation to him and he quickly turned away from performance and classical composition to concentrate solely on tape music.

After completing the Conservatoire’s “Diplôme de musique électroacoustique et de recherche musicale” (he was one of the first students to do so), Smalley moved to England to obtain a Ph.D. from the University of York. His first known works date from that period. Gradual won the Fylkingen Prize in 1975. He was appointed lecturer at the University of East Anglia (Norwich, England) the following year and remained there until his appointment at City University.

Between 1976 and 1986, Smalley actively promoted electroacoustic music, developing the concept of sound diffusion in England. He is also renown as a theoretician in electroacoustic music aesthetics. He developed the notion of “spectromorphology,” the shaping of sound spectra through time. His other awards include an Euphonie d’Or (Bourges competition) in 1992 for Darkness After Time’s Colours and a Golden Nica (Ars Electronica, Linz, Austria) in 1988 for Clarinet Threads. 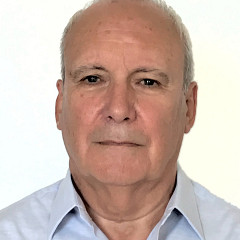 Denis Smalley
He developed the notion of “spectromorphology,” the shaping of sound spectra through time.