I didn’t expect to like My Cinema for the Ears. The description seemed precious and ill-defined: “An impressionistic, wryly humorous look at nature and the creative process.” It didn’t help that it began unassumingly, with shots of the Stanstead, Canada’s countryside accompanied by Vivaldi’s “Spring” segment from The Four Seasons. So what else is new? Plenty. Not long after that inauspicious introduction, Aumüller introduces veteran electronic composer Francis Dhomont at work, assembling his music to Vivaldi’s poetry. He needs a “faithful dog,” so he goes out into the countryside with his analog recording equipment and finds one. The humor creeps in as he encounters an uncooperative sheep dog, a curious farmer, and bees. Aumüller shows brief glimpses of Dhomont’s computer technology at work, yet not in a dry expository sense, but more as a link in the process. Dhomont is then quoted as saying that Debussy wanted to paint music, which is not exactly true but it leads into a charming sequence composed of Aumüller’s poetic images and Dhomont’s music. He says “we have more in common with the filmmaker than with traditional musicians,” because of the dependence on media and the way that concrète composers intervene by cutting, mixing, etc. At the 19 minute mark a fragment of the piece Water Music (En cuerdas) plays, a hypnotic composition that becomes more concrete with Aumüller’s brilliant use of sped-up and close-up imagery. Soon Dhomont is discussing work methods with American musique concrète composer Paul Lansky.

As more of these segments transpire-interview, compositional fragment, interview again—it becomes apparent what this film is showing us. These musicians mine everything in nature, the city, and social interactions (like parties) as sources for music. A thumping trip over a suspension bridge: why not digitally alter that rhythmic sound and distort it so that it’s both unrecognizable and a fascinating musical figure? Attend a social event and record snatches of conversation. “Loudspeakers are windows into an imaginary space,” says Lansky, with Aumüller skillfully illustrating his point. The DVD comes with four excellent audio tracks, featuring pieces by Dhomont and Lansky. Oddly, they aren’t sequenced, so you have to play each one separately. Also, your DVD player’s pause button may refuse to work, like mine, although I had better luck on my DVD-ROM player. Despite this technological fluke in the middle of a DVD about audio technology, this art/documentary film is memorable and worth having. 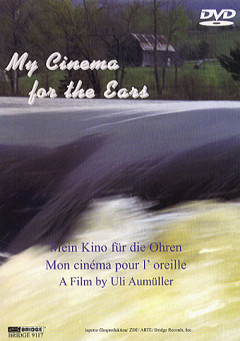 My Cinema for the Ears
… this art/documentary film is memorable and worth having.