Volume 3 in the Canadian Electroacoustic Community’s Presence series came out in June 2002. Once again a 2-CD set, it presents 29 works by as many artists. These composers are for the most part rarely seen on record (only Laurie Radford, Adrian Moore, and a couple more have full-length releases available). The series’ intent is to give exposure to the work of CEC members, not to produce easy-flowing albums. The listener is meant to dive in, take what he wants and retreat. That explains the alphabetical track list, but the CDs can still be listened in full with some enjoyment. The music ranges from musique concrète to sound synthesis and environmental recordings. Half of the tracks last between 3 and 4 minutes. The others are either slightly shorter or longer, none going over 9 minutes. Beside one piece by Martin Alejandro Fumarola dating from 1989, all works are recent. Stand-outs include James Bentley’s Double Exposure, academic but very well done; Ian Chuprun’s I Was Very Safe… In My Dream, a disturbing juxtaposition of children talking about their dreams (and their mother’s lie: Daddy’s microphones aren’t turned on) and adults laughing at a party; David Hirst’s Mon Dieu, where tennis, boating and religion come together; David R Mooney’s ambient The Llama Strut; and Steven Naylor’s Irrashaimase, a beautiful reminiscence of urban Japan. 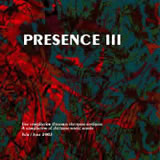