L’envol is the first solo album release from American-born, Brussels-based composer Elizabeth Anderson. She is a prolific artist and teacher, and when I hear the opening of L’envol, I feel somewhat like I am at the beginning of a lecture on electronic music.

The sounds are perhaps what you might have expected from the title of the record, (L’envol is French for The Flight), but only if you have spent a lot of time watching science fiction films from the Nineteen Sixties. I know these soundscapes because they furnish my dreams. It is a vernacular that as a reader and writer of science fiction — stories of space and space travel — I know very well. This is not a bad thing, although it does afford me a level of commitment to the narrative of these haunting pieces that I realise that those unfamiliar with the genre and its common narrative might find inaccessible. I would hope that, like me, listeners will be engaged by the ideas presented and then be prepared to take the chance and listen with open minds as well as open ears.

This work deals with themes that are well-known, not tropes exactly; archetypes perhaps, and reflected in the titles of the different pieces — Les forges de l’invisible (“The Invisible Forges”), Solar Winds, Ether, Protopia/Tersseract — evocative of the kinds of titles to stories that take us into uncharted space in the deepest parts of the universe. I was drawn to this music because of this so it is unsurprising, and possibly quite affirming, to discover that it does exactly what it says on the tin.

What, inevitably, I find myself coming to believe is that Elizabeth Anderson also has this shared vernacular of the genre, that she is communicating the same ideas and thematic narratives of science fiction writing, the ideas and themes that draw me in to the writing and films of the genre. Because the thing that is most important to say is that, whilst there is nothing here that an aficionado of science fiction won’t recognise, there is nothing of the parody in this work. It is in itself a genuine work of science fiction, just as you might find in the writings of Ursula Le Guin or Isaac Asimov. It deals in the same big themes of vastness and loneliness, of unknown landscapes. It introduces your brain to concepts of scale that are impossible to experience on our small planet, and to concepts, therefore, of our own humbling insignificance.

I find myself wanting to accompany this piece with an infographic depicting our size relative to the universe (actually, for anyone who found the soundtrack of the film Gravity as irritating as I did, this would make a very good reboot). I did not want to write about this work track by track; the thematic structure of the work is the point and the component parts are narrative in their flow from one place to the next, much as any collection of movements in a symphony for traditional instruments. That this work is made using sampled sounds and synthesised recordings does not take away from its symphonic structure or its ability to engage the listener’s attention. If you are looking for recurrent themes, it is not in motifs of repeated sounds that these appear, but in the return always into the silence between the sounds, which then in turn bring you back to the huge emptiness of space, slightly altered by the journey.

I feel as though, even if I listen to this every day (and I have been), I will hear something more in there each time and be intrigued. If there is a concern about the hook of this collection, it is that unless the listener has a vested interest in the narratives of space and space travel, they might not bother, just as with genre fiction in more traditional media. I suppose this is the chance one takes making art that is about things that are as yet unknown or potentially unknowable. I like L’envol for its stark galaxyscapes and the enormous quantities of emptiness it affords my ambulations into the realms of those places, although I suspect it is, like deep science fiction writing, not for everyone. 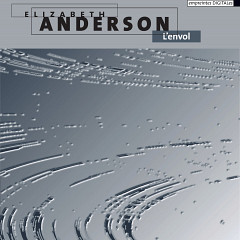