Simply put, this is a great project, well conceived and marvelously concretized. Arturo Parra, an excellent classical guitarist specialized in the modern repertoire, has commissioned electroacoustic pieces from four of Quebec’s most renown acousmatic composers: Stéphane Roy, Francis Dhomont, Gilles Gobeil and Robert Normandeau. Each work had to stand on its own (and some have been released on other CDs), but Parra also composed four pieces for guitar and tape using them. The eight pieces (tape only and mixed) were premiered at FIMAV 1998 as the program Parr(A)cousmatique. Four years later the label empreintes DIGITALes released Parra’s four mixed works plus a fifth piece composed with Mauricio Bejarano following the same method. The guitarist has managed to respect the spirit and idiosyncrasies of each composer while giving the cycle its own identity. The pure, untreated sound of the classical guitar could have felt like it was just pasted over the tape part. On the contrary, Parra’s playing creates a fully-integrated contrast with the electroacoustics. He uses extended techniques without banning the instrument’s (and his own) Spanish heritage. La basilique fantôme (with Roy) opens with flashes of typical guitar virtuosity that establish the setting of the whole cycle. That piece and L’envers du temps (with Normandeau) provide the best moments. In the latter, the guitarist elaborates a stunning discourse, a song that parallels a rich tape drone. Highly recommended to enthusiasts of electroacoustic music and contemporary acoustic guitar alike. 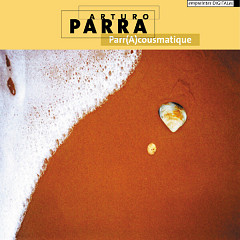