If you’re looking for music for your next salon gathering of MENSA members, you’ve found it in Rhizomes — music so highbrow that it’ll melt into your hairline. Despite its required accompaniment of burbles, bleeps, whistles and whines, it’s much more melodic than you might expect — as acousmatic music goes, anyway. Don’t be too surprised if the album and its creator end up becoming the focus of your conversation, rather than the background music for it.

If a George Lucas movie married a Claire Denis movie, this soundtrack would be the music for their Hitchcockish children. Metharcana sounds like its name, a children’s arcade experienced on meth, with a bunch of obscure references floating past your eyes. Sound bites of a woman whispering in French, fingers thrummed rapidly on a tight skin drum, coffee cups clanking against each other, video game noises… they’re all used to create an atmosphere of weird musical emptiness. The video game noises remind me of DJ Spooky tracks, but mostly this is the electronic type of experimentation you’d expect to find on a Schematic Records release. Rituellipses sounds like performance art — the kind of thing you’d hear while watching the Blue Man group do its thing. In fact, Dunkelman has composed for art exhibitions (Charlotte Marchal, sculptor; Axel Miret, painter), for art dance choreography (Michèle Noiret) and for fashion design (Azniv Afsar) — all of these artists, of course, members of the avant garde.

The sounds in Rituellipses could be billiard balls knocking against one another on a hard surface. You’ll wonder what the ritual is, and if the ellipse is part of the ritual or if it is the ritual, and then — if you’re like me — you’ll get a headache and sit down fast in case you get dizzy. While certain loops in this piece seem to have been repeated from an earlier movement, all of the musical ideas are pushing forward in a linear fashion; older themes are abandoned, newer ones taken up and pushed to their conclusion. As many electronic compositions of this variety focus on the idea of layering, this is a really interesting change of the format on Dunkelman’s part. And he always lives up to his name; these compositions are really dark, even when he’s experimenting with brighter tones, like a bouncing basketball and athletic shoes scraping on a gymnasium floor.

Whenever you listen to Dunkelman, you’re going to have to think hard — he’s a workout for the mind, as strenuous as solid house music is a workout for your hips. Rhizomes is definitely going to plant seeds of thought. 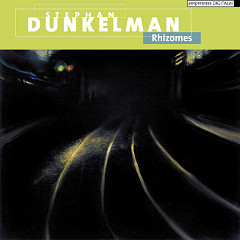 Rhizomes
… a really interesting change of the format on Dunkelman’s part.