… I’ve been catching up with some of Empreintes DIGITALes’s output from late 2014 and want to flag up a couple of highly impressive discs. The renowned Canadian electroacoustic composer Robert Normandeau‘s latest offering is Dômes, featuring five pieces either revised or completed in the last three years. As in all his work, the interaction between familiar sound sources and their more abstract treatment is fascinating. Kuppel uses the bells of a church in Karlsruhe as an omnipresent pulse, pitch centre and point of perspective. Normandeau layers the noises of trams and a squealing door over these bells such that a strange kind of veracity appears, simultaneously life-like yet obviously artificial. Baobabs is the most obtuse piece on the disc, a 15-minute surreal stream of consciousness for four voices, six percussion and tape that persistently keeps one at a distance. Thankfully, it’s the exception to the rule. Hamlet-Machine without Actors and Pluies noires engage with theatrical drama; the latter piece, with the Bosnian conflict in mind, is a disconcerting aerated dronescape peppered with heavy dull impacts that seem to squash and leave dazed every other sound. They become reduced to extended whispers and gargles, occasionally marshalling themselves sufficiently to form potent but short-lived eruptions; a sense of struggle is palpable. The former piece also employs a drone at its centre, a beautiful, radiant core beneath shifting metallic/industrial strata. A work about “the oppression of man by society”, perhaps Normandeau locates humanity within this luminous core, in which case its persistence makes this a positive statement. La part des anges is the album’s highlight, though, an opulent, shining piece of pure sonic ecstasy, full of rich clouds of complex tonalities and the evocation of a myriad celestial voices. 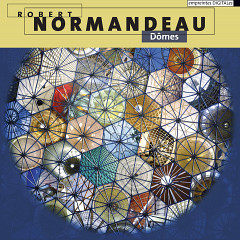 Dômes
La part des anges is the album’s highlight, though, an opulent, shining piece of pure sonic ecstasy, full of rich clouds of complex tonalities and the evocation of a myriad celestial voices.