British[-based] computer composer Erik Nyström seems to focus more on the process of making a shape than the shape itself in the explorations that got collected in Morphogenèse; the explanation of a process could be more or less an easy task, but rendering it by means of sounds is much more engaging and troublesome, but Erik managed to walk over this arduous and somehow trackless path by means of riveting sonic strategies, that he developed within pertaining conceptual field. A sort of elastic noise is the sparkle of the opening Catabolisms, whose thrilling sequence of aggregating and disgregating textures really mirrors the description of catabolic processes by German art theorist and perceptual psychologist Rudolf Arnheim in his essay Entropy and Art (“all sorts of agents and events that act in an unpredictable, disorderly fashion and have in common the fact that they all grind things into pieces.”), referred in the introduction of the track, which gradually reaches a sort of point of no return, where the breaking of all chemical bonding and the bursts of energy that followed each step of these catabolic processes pushes listener close to a sort of nowhere; similarly, a sonic sparkle — the elongation of a pure frequency of a sort of diapason — ignites the following Latitudes, a track which manages to evoke a generative process of gradual expansion that begins with a compressed sonic corpuscle. Lucent Voids, the longest composition of this collection, sounds like an unpredictable game, whose aim is the modelling and the thinning of the diaphragm between time and space, while Erik seems to add film and sheers to pure sounds on the track Cataract in order to render the analogy with the medical condition of the eye lens as well as the Greek etymology of the term “acousmatic” — its origin can be traced back to Pythagoras and should derive from the term akousmatikoi, the outer circle of the disciples of the Greek philosopher who could hear the lessons of their teacher, who spoke from behind a veil so that his presence could not distract them from the content of his lessons. These four pieces are stereo versions (for home listening) of pieces that were originally conceived for 8-channel concert projections, while “Far-from-equilibrium” — an impressive electroacoustic translation of almost randomly self-generating entropic sonic entities and textures — comes from a stereo tape. A pair of really good headphones is highly recommended. 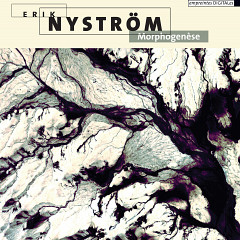