Nécropolis, the latest compilation of works by Swedish composer Åke Parmerud, is altogether more problematic. Last year’s Growl indicated a composer fond of confining himself to discrete aesthetic and sonic limitations, but in the case of these four pieces, it’s surprising and disappointing to hear a recurring vagueness permeating them. In the case of Dreaming in Darkness, an attempt to “create surrealistic fragments of a blind person’s dreams”, it’s not entirely clear whether the overt lack of clarity that’s surely the work’s defining feature means Parmerud has succeeded or failed in his aims. Surrealistic it certainly isn’t, which is a shame as it might have provided something outside the palette of rather hackneyed bells, whooshes and thuds that comprise the primary content of the piece. Indeed, Parmerud’s default approach to demarcating structure via heavily-articulated percussive blunt impacts is subject to a strict law of diminishing returns. The title piece is worse, an arbitrary mashing-up of musics — from Wagner’s Valkyries to Palestrina’s Papae Marcelli mass to Mozart’s Requiem — that’s the epitome of apathetic (mis-) appropriation, with no meaningful sense of direction or purpose. Crystal Counterpoint is a more engaging examination of the sonic potential of wine glasses, fashioned into a pretty loose-weave tapestry passing through nicely differentiated sections, forming a coherent narrative. These are sounds we’ve arguably heard rather too many times in acousmatic music yet nonetheless it’s a piece that certainly makes the most of their limited but very particular timbral qualities. ReVoiced, composed in 2009, is narrowly the best of the bunch. A simple work passing through four different types of regional vocalisation, the first part is sufficiently rudimentary that it gives the impression Parmerud is simply playing with software presets, but the rest are sensitively handled, scrutinising their respective qualities. The second, featuring a Russian woman singing (the only female voice, providing some respite from the work’s overall low register emphasis) is especially lovely, but in no small part this is due to the loveliness of the source recording. It’s hard to recommend such a qualitatively-challenged selection as this, but it’s not without some nice moments. 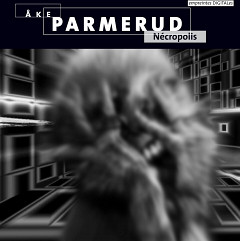 Nécropolis
ReVoiced, composed in 2009, is narrowly the best of the bunch.