Books on Tape, one of the pseudonyms of Todd Books (which is in itself is a pseudonym of Todd Drootin), have made their mark up to now providing background music for MTV’s reality TV shows and providing the online community with quality MP3s that could best be described as indie-electronica. The neat thing about Throw Down Your Laptops is that it doesn’t follow the usual pathway that home-made dance music does. Books doesn’t rely on computers, preferring to layer beats, blips and beeps with guitars and other instruments to make some old-fashioned electronica performed live in the studio. Naturally, he had some help along the way, including members of Bright Eyes and Slowcoach, helping to keep that indie-rock philosophy. Throw Down Your Laptops is one of those albums that is fun to delve into, but it is exhausting to listen to the full album is one sitting. Some of that has to do with the growled vocals on some songs that really break up the flow because they seem out of place with the far superior music. Perhaps more care when picking collaborators next time round would help. 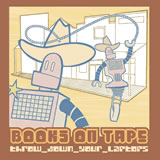