Friday at HCMF began with a recital by rising star cellist Seth Parker Woods. I’ve had the opportunity to see Woods play once before (at HCMF 2014) and the experience was a highly impressive one, so I was very much looking forward to seeing him in action again. He did not disappoint, performing four challenging works, two of which involved live electronics. […] The unquestionable highlight of the concert, though, was Pierre Alexandre Tremblay’s asinglewordisnotenough3 (invariant), which provided both a composition masterclass in its seamless, aurally non-hierarchical interaction between acoustic and electronic, as well as a performance masterclass in its bravura display of frantic virtuosity from Woods. The work’s narrative was excellent, progressing through a series of evolving episodes each fuelled by the cello, many of them rhythmically taut (though never sounding metrically fixed) with a tendency later to expand out into more sustained soundscapes where the cello’s material was more buoyant. Utterly thrilling, and Woods unstoppable performance was outstanding. […] 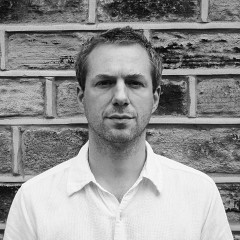 Pierre Alexandre Tremblay
… a composition masterclass in its seamless, aurally non-hierarchical interaction between acoustic and electronic…