Commissioned by Derek Besant to accompany his 2012 exhibition, Broken Ground, Christian Bouchard’s album of the same name features remixed versions of the original pieces and they’re exquisite in the attention to detail he pays throughout. You might expect that from someone who studied at the Conservatoire de musique de Montréal and was awarded First Prize in electroacoustic composition.

As I’ve said before and no doubt will again, to these ears, the technical aspect (the science of electroacoustic music) is but one (necessary) step towards realisation that transcends the study of sound to create sonic wonders. Hear Voids Patterns, for example, it’s treated bell chimes (?), perfectly weighted against static crackle and electric whine. Throughout the works Bouchard shifts the emphasis from a relatively ‘light’ tonal palette towards occasionally stable rhythmic patterns along with bursts of guttural noise. The overall balance is towards weightiness but always there are counters, the kind which differentiate this music from, say, simplified Industrial electronics with which you could say this shares some common ground. I might call it ‘Industrial music with a degree’… but that could sound stupid. Another superb release from empreintes DIGITALes. 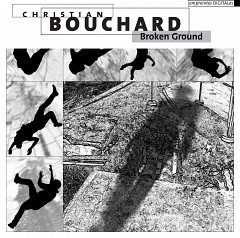