Francis Dhomont is a composer from France who has been composing ‘musique concrète’ and electroacoustic music for over 60 years, along with composers like Pierre Henry and Pierre Schaeffer. Besides composing, Dhomont also lectures at the University of Montréal and writes articles about music-theory. Dhomont taught a lot of other composers, like Robert Normandeau, Christian Calon and Yves Daoust and many more.

Jalons is Francis Dhomont’s 7th CD release (his 6th on empreintes DIGITALes). The eight pieces contained on this CD were composed between 1985 and 2001. The music ranges from subtle soundpatterns made from various recorded or ‘found’ sounds to very organic sounding storms of drones. Dhomont seems to play with the recognisable element of sounds a lot, since a lot of the sounds are on the edge of recognisability. Some are totally recognisable while others are totally abstract. This makes the compositions very intriguing and an exciting listening experience.

Dhomont seems very fascinated with the sound of voices of humans or animals, since this seems to be returning on every release. Voices are obviously a source of great recognisablity, but they are also very useful for manipulating. Although certainly not all works contain vocal samples, other sounds used in his compositions often seem to turn into vocal-like parts. Most of Dhomont’s works therefore seem to turn into both organic and industrial sounding waves of sound. Dhomont’s works sound something like a flock of mechanical birds chattering.

Mind, electroacoustic compositions are often meant to be ‘performed’, mostly in theatres or at exhibitions. This means that there is nothing else for the listener to focus on, so the music is often very demanding (difficult). Therefore this CD is not exactly easy listening ambient work (although it can of course be used as such). To be able to fully experience its potential it requires dedicated listening, preferably on a perfect installation, or with headphones.

The works of Francis Dhomont will certainly appeal to those who like musique concrète or electroacoustic music, and to those who are willing to give a CD a really thorough listening. It will prove to be a very exciting listening experience. 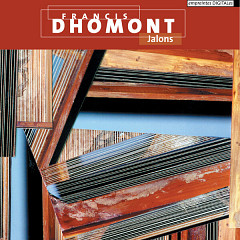 Jalons
It will prove to be a very exciting listening experience.