Montréal-based Parisian Ana Dall’Ara-Majek is releasing her breakout debut, Nano-Cosmos on Empreintes DIGITALes (CD/DL). The label has been producing high quality records back to 1990 and often remains coolly under-the-radar often celebrating some of the best French Canadian electroacoustic music work, paralleling anything out there. Dall’Ara-Majek is also one half of the multidisciplinary duo Jane/KIN (w/Ida Toninato). But here on her own these five pieces composed between 2012-17 explode with exuberant, innovative flourishes that tickle the most challenged of eardrums. Normally I might write a review after a single listen, this is riddled with complexities, requiring multiple spins, not to understand, but to appreciate its breadth of nooks and crannies.

The record begins with the earliest track, Akheta’s Blues, which starts off with a tingly series of electronic bleeps and earthy-crunchy footsteps. A distant horn shimmers into a light symphonic outbreak, with active fore/backgrounds this is quite a dynamic recipe of in-situ effects, the only slim similarity I can think of is perhaps some of the critical work of Illusion of Safety (Dan Burke). The oblique dissonance is strikingly live in nature. The rustling is playful yet tectonic. Diaphanous Acarina uses a drone emission and microsound, stretched over a skeleton of regret.

Bacillus Chorus was realized in 4 channels at the blue spider studio in Montréal (Québec) in 2016 and was premiered on august 7, 2016 at the Internationale Ferienkurse für Neue Musik at Centralstation in Darmstadt (Germany). It was commissioned by the Distractfold Ensemble. Thank you to Christine Groult and Marco Marini for those wonderful days of improvisation on the RSF Kobol synthesizer in the electroacoustic studio at the conservatoire de Pantin (France).

There is a mythical tale woven here, something beyond the naked eye, microscopically synthesized. This is a timeless piece that could have been recorded two decades ago for Trente Oiseau, Plate Lunch or Mille Plateaux, but is most insistently flash-forward. Next is the unsettling Bacillus Chorus, filled with a “for the birds” squealing pitch retrofit over a covered percussion and space laser effects. For lovers of electronic music, there is no time but the present to revel in such evolving, shape-shifting patterns and textures as there are on Nano-Cosmos. The endless experimental intricacies here are an eyelash short of numbing, meaning this will lull and excite simultaneously.

Pixel Springtail Promenade starts off with a minimal ghostly drone and a bit of electro-static, bathed in a vague industrial guise, and field recordings from a playground and other building blocks. It sharp cuts from looming-danger quietude to the harsh realities of the outdoors, nature, people, trotting horses and machinery. Connecting the dots is a mad scientist at the boards, processing the overall picture, playing god/dess ala Westworld. Yes, it seems like a classic machine vs man vs manipulated memory scenario, one where multiple realities could possibly ring true. In this way the piece draws from a seemingly encyclopedic style of samples and processes that are in essence an audio storyline. I’m just imagining this being developed for AI, and how one might lose themselves in the pageantry of pastiche and sensory overload.

Xylocopa Ransbecka: The album concludes with chirping birds as heard through the right and left channel separately as the third-person is inside a vehicle of some sort, letting the sound in, becoming silenced, then bird songs metamorphosize, becoming a flurry of tape manipulations, it’s a marvelous transition. It’s a tangle of jangling amplified percussive pleasures, stops and starts with constant activity. There are moments where I’m recalling the quirky side of Esquivel of all references, but this is far from groovy. No, instead, a rush of layered sounds become a fiery avalanche, the timbre of timber, lit and doused with the sass of light rain, and suddenly you are comparing the buzz to bees and race cars to chainsaws. What the recording truly has in its pocket is its ability to throw the listener off guard, into an imaginary morphing world where nothing is at it initially appears. En garde, for a truly astonishing debut! 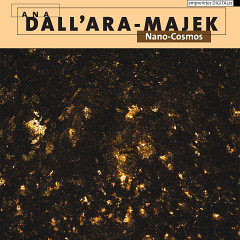