Last heard from English composer Manuella Blackburn with 2012’s Formes audibles, apparently her debut release, where Stuart Marshall was very taken with her “fresh and authentic… manner of articulation.” Today’s excellent release on the same label is Petites étincelles (empreintes DIGITALes, IMED 17147), and surveys five works dated from 2012 to 2017, each one evidence of a very sensitive and intelligent approach to sound manipulation and highly respectful of the source objects she’s captured them from.

Take Javaari, based on samples from sitar playing. She’s homing in on particular details of the physical instrument (the bridge, the buzzing sound of the strings), and creating a kaleidoscopic arrangement to highlight these aspects that interest her. This is based on her understanding of the culture of the instruments and the musicians that play it, even if the results are so heavily re-ordered to sound like no sitar music ever heard before. It’s a bold coup to create such a radical reinvention of Indian music, yet without once departing from its core truths.

Ice breaker, derived from the sound of ice cubes dropping into water, is likewise founded on a firm understanding of physics and what actually happens, scientifically speaking, for the ice to create that cracking and popping effect. Starting from these basic facts, Blackburn is very clear about what sound she wants to capture, what phenomenon she wishes to demonstrate. The overlays of bubbling and fizzy liquids are used to underscore this fact, and are not simply there for decoration. Net result, one of the most “realistic” sound-portraits of ice and water yet to be heard; which takes some doing, given how over-used this trope has been in the field of electroacoustic composition.

Then there’s Snap happy, the most recent piece on this set, created from the sounds of cameras. One of Blackburn’s interests is in “the miniature”, by which she means small sounds and events which are barely perceptible; she doesn’t boast about the power of her microphones or the technology needed to capture such things, but she does discourse like an expert about different makes of vintage cameras, in one compacted paragraph of notes. The old Kodak Brownie from the 1940s had “much heavier clicks and clunks” than more recent cameras, and she seems to be very conversant with these internal mechanisms. You get the feeling she could understand any given device by opening it up and examining it, probing with inquisitive fingers. She likes the way old cameras used mechanics to wind on the film, and these sounds feature heavily here. This piece also muses on the way that modern digital cameras use sound effects to mimic these old sounds, even though there’s no need for them to do so (Come to that, why don’t word-processors imitate the sounds of a typewriter?).

Also here, Time will tell, derived from clocks and continuing the theme of miniatures, Newtonian mechanics, and interest in common domestic objects; and New Shruti, another composition starting from knowledge of classical Indian music and this time exploring the shruti box / tampura. Here, as throughout the entire album, Manuella Blackburn’s skills in assembling microscopic fragments of sound into a coherent whole are evidence of her genius; there’s craft and skill in her mosaics, but also much instinct, and the aim is to create beautiful music rather than simply demonstrate digital techniques. Blackburn seems to have a profound understanding of things, of objects; is able to apprehend their inner workings with precision and accuracy; and this skill may in turn help her to decode other signs, to understand something about the workings of the world. A truly excellent set which I recommend. 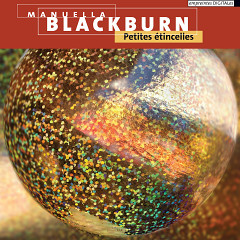