A compilation of independent works from sound artist Alistair MacDonald, ranging from 1997 to 2013, this collection of processed found sounds is a gentle exploration of everyday noises from which richer and less familiar aspects have been teased out and highlighted — sometimes with the mildest of touches, sometimes with a far more heavy-handed post-production-centric approach.

Opening piece The Tincture Of Physical Things initially seems like purely layered found sound atmospherics, but the grumbles of earth and fire build progressively and it takes time to appreciate the subtlety with which you’re being presented with something composed rather than just found. Final Times is also on the subtle side, while Bound For Glory (Postcard From Poland) is a rather straight-laced piece of train noise with very subtle layering and processing that reminded me of the recent CNSNNT release T. Final piece Wunderkammer is built from jungle sounds, treated with resonance most prominent on its bell-like notes to give a more dream-like layout.

Less subtle pieces include the Delia Derbyshire -inspired Psychedlian Streams, which adopts a Radiophonic Workshop-esque approach to sonic twisting but with a pace more frantic, skittish and spontaneous than anything I heard Derbyshire create. Pieces like the ‘glass instrument’-derived Scintilla are a touch more conventional, playing with tuned resonances and reverberation to create an inner alien world, and are counterpointed by the gravely growliness of Equivalence.

It’s a generally quite neat approach to found sound as a dominant source without any obligation to purity of its treatment, resulting in seven fairly disparate but certainly intriguing sonic environments. 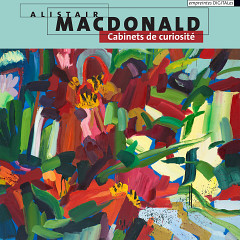 Cabinets de curiosité
It’s a generally quite neat approach to found sound as a dominant source without any obligation to purity of its treatment, resulting in seven fairly disparate but certainly intriguing sonic environments.