Paul Dolden’s albums are few and far between and there is a very simple explanation for that. Just listen to Entropic Twilights, the 49-minute opus taking up most of this CD to hear how many tracks are stacked up, how many fragments juxtaposed, how many structures interlocked. Produced over five years, this triptych draws its inspiration from the overwhelming quantity of music and sounds we are exposed to in a day. Dolden puts so-called serious music, rock, jazz and muzak all on the same level, editing drums and electric guitar into choral passages, using cheesy keyboards in Stockhausen-esque developments. At times, the whole thing sounds like one of Tim Brady’s large projects times ten. Dolden shuffles genres, approaches, winks and quotes, the result being a riveting, engrossed thrill ride that will leave you panting. Maximalist and extremely detailed, the piece is a tour de force and succeeds in illustrating how our constant exposure to all kinds of music tends to drag it all down to a single level. The program on Délires de plaisirs is rounded up by two more pieces from Dolden’s Resonance series, numbers 5 and 3. The Gravity of Silence. Resonance #5 features flutist Chenoa Anderson in a virtuoso contest against herself and Dolden’s banks of samples. The piece is built over graceful melodies that grow increasingly frantic. The Heart Tears itself Apart with the Power of its own Muscle. Resonance #3 follows a similar pattern, although this time the featured performer is Dolden, playing a 10-piece string ensemble all by himself. With its added drums, electric guitar and vocal sections, this work takes us back to the organized eclecticism of Entropic Twilights, by way of Frank Zappa’s cross-stylistic fantasies. Demanding, exhausting, but extremely rewarding. 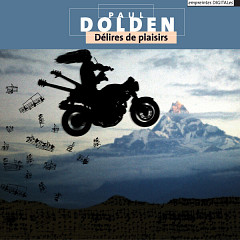