empreintes DIGITALes has issued its first two DVD-Audio discs. This is one of them. I don’t know if most people that are likely to buy these forefront, top-of-the-line sound art works already have compatible DVD players, but most likely they do. Even I got myself one not long ago, and I’m usually very slow in catching on to new technology. Well, maybe that isn’t completely true. Thing is, I don’t even own a video player, and the reason is that I’ve been so very occupied and intensely passionate about sound as sound that I didn’t need or want an visual information from the outside interfering. There are always plenty of visual things happening on the inside of my eyelids when I listen to any kind of music – but especially when I hear electroacoustic music.

However, I wanted to watch some Tarkovsky movies, and when I saw that DVD player prices plummeted, I got a machine – and right after that these two DVD-Audio were released by empreintes DIGITALes, and I’m suddenly finding good listening use too for the player! Besides, you can play these discs on your computer too.

The sound of this Normandeau DVD is amazing! It blows me away!

Puzzle – track 1 – kicks in with a panting, breathing commotion, crunchy and munching, slithering between lips and out of the corner of mouths; saliva ejected in rhythmic frenzy, in a kind of torrential beat of good humor and wry smiles, sideways motions, sudden attacks out of nowhere and a stubborn nose-and-ear-tip tickling that all but drives you nuts! A male sigh-machine is followed by a female lust-borne sigh that comes and goes, repeats itself in soaring eroticisms, slanting and gliding, erupting and stumbling, rushing and breaking, rolling and rocking, yes! The woman even sounds like a horny cat at times, but one that does get her fishy reward, right on! Fritz the Cat, go into hiding: this kitty rules now: cat woman bouncing and jabbing; get lost or get with it!

Some sped-up conversations – or rather monologs – inside this frantic musical gesture remind me seriously of Paul Lansky’s More Than Idle Chatter: these stalemates of phonemes and morphemes in a juggling act of insanity… while other puzzling Puzzle traits offer analogies to Pierre Henry’s early Variations for a Door and a Sigh! Clever and FUN!

Piece number two is Éden, a longer work of more serious properties. When I get to this work I feel the need to study the liner notes, which on the tediously composed covers of empreintes DIGITALes’ CDs are found in different font sizes all over the place, geometrically up or down or sideways, so you have to turn the cover this way and that to find out what you need, and if you’re nearsighted, your have some advantage. This is no trouble though, just a specific style of empreintes DIGITALes, and there is a lot of information in place, which I certainly appreciate.

So, when I look and read I find out that the whole Normandeau CD in fact delivers music in the form of adapted compositions made from music for various plays directed by Brigitte Haentjens in Montréal and Quebec City. Puzzle (track 1) is based on the music for Farces conjugales by Georges Feydeau – and this work on track two – Éden – comes out of L’Éden cinéma by Vietnam-born Marguerite Duras.

I became curious as to the origin of thought and intentions as I spun Éden into the laser box, because it begins with an Eastern style female song, close and natural, straight out of the village or the fields, more like a good old Ocora or Folkways field recording than a Canadian electroacoustic work. Normandeau explains this elsewhere on the CD cover: “The music quoted at the beginning is a Laotian song that appears on the album India Song et autres musiques de films that composer Carlos D’Alessio wrote for Marguerite Duras, released by Chant du Monde (LDX 274818).

Normandeau further talks about his composition (elsewhere on the cover): “I imagined music made of very long sound loops over which very little happens, some sound events disseminated here and there over time and space.”

The song is Easterly beautiful, like a lullaby in the rice fields – but soon it is abruptly cut short – or simply ended! – relieved by a dense fabric of glaring, tingling and soaring audio that is layered in several – innumerable – strata of events, long, out-drawn events that seems to encircle the planet like the gas clouds of Jupiter as seen on Voyager imagery plastered om office walls throughout the industrial world.

The soaring, deep and wide sonorities carry all kinds of analogies, in a wicked messenger kind of way, emitting Morse codes and shortwave static, as well as angelic, Stockhausenesque modalities that rise and sink like sea gulls on the wind, like hope that rises in your heart only to descend into despair – and I also hear otherworldly voices from spiritual beings that sing a Mene Mene Tekel Upharsin high up the pitches, in stratospheric vacuum states! They remind me of an old Japanese movie about divine justice that I watched on television in the late 1950s in Sweden, when I was a young Elvis Presley boy of the countryside.

Inside this massive transparency of forth-welling audio you are stung by the viciousness of sharp, granular elements that afflict your face in the below-zero manner of sharp nails of snow in a serious Lapland winter storm, which you’re headed into in the vicinity of Saami village Nikkaluokta.

A deep, rumbling grand piano sails by like the contents of a surrealist painting, relieved of all its traditional ties to a concerto reality, on the loose in a shaman world of sonic gestures and symbolic dream debris, as if in a fever dream on the verge of unconsciousness in which the spirit shakes its shackles and longs to cast off its forced anatomy!

This music is so forcefully compelling and lustful that I get the urge to turn up the volume and really loose myself in it. Other composers, whom I’ve began to feel hostile to, review-vise, can’t handle such a density of sound – but Normandeau succeeds fluently, light-handedly, without any obvious effort. I am impressed! Very beautiful, but also exciting!

The third work on Robert Normandeau’s DVD-Audio disc Puzzles is Chorus, on tracks 3 – 9. This is a genuinely serious matter. The piece has a subtitle: “To the victims of September 11, 2001.” I choose to hear that subtitle as a sorrowful bow also to the current, present-day victims in the aftermath of the New York attacks; those ill-treated and tormented people harnessed in Guantanamo Bay without the benefit of fair trials by the illegitimate war crimes regime in Washington, and the families slaughtered in Afghanistan and Iraq and Palestine by the same illegitimate American war criminals, whom I’d like to see side by side with Milosevic at the War Crimes Tribune in Den Haag. Be sure, though, Mr. Bush: YOU CAN NEVER ESCAPE YOUR NEXT LIFE!

Normandeau also divides this work into the following parts: “Overture”; “Judaism”; “Christianity”; “Islamism”; “War”; “Pain”; “Peace”. Then Normandeau shows that he’s able to broaden his view and see things in a wider and deeper perspective, because he says: “The music is inspired by the subject of the play Nathan the Wise by Gotthold Ephraim Lessing, which demonstrates the tolerance ideal of the Age of the Enlightenment.” In the play, it is said: “If it is not given to mankind to theoretically know which religion is the true one, everyone has the practical possibility, by his self-less actions, to prove the value of his faith and his aptitude to contribute to the happiness of humanity.”

Normandeau further explains that the sound material he used is typical of the three monotheist religions: the shofar of Judaism, the church bells of Christianity and the prayer calls of Islam. The beginning is mighty, with an electronic mimicry of Tibetan monks chanting high up among the mountains of the Himalayas. The soaring, thumping progression of sounds is a dense and still transparent as the sonorities of the piece Éden, only more ominous, fateful – and perhaps… hopeful!

It feels like Robert Normandeau brings something from deep within into the sonic open in this work, that he taps into a common resource of mankind, a common inheritance, far beyond the evil differences of day-to-day life on the surface of the plane; from within a reality that is far more real than this blinding show-off of material objects that occupy our bodily existences and cause us to take up arms against each other. I seldom feel this kind of significance in a piece of music, but here I really do. Normandeau’s skillful merger of the sounds of three monotheistic religions of a common inheritance with a nontheistic religion of the Himalayas is wondrous, immensely beautiful, with an awesome message attached, leading way beyond what seems to be, deep into what IS! Fantastic! Staggering implications!

Normandeau’s next work is StrinGDberg; a title that makes a Swede like myself extra alert, since August Strindberg (1849 – 1912), of course, is one of the giants of Swedish literature and theatre; a stubborn, weak and strong and completely unlikely Renaissance character, whose enfant terrible-role in society is especially apparent in view of that he never received the Nobel Prize of Literature; a startling exposure of the double-standards of the Swedish society and a fact that seriously degrades the significance and importance of the prize.

The music is based on Strindberg’s play Miss Julie. The title is a play on words, of course: the name StrinDberg and strinG. The instruments used for the source sounds are the cello and the hurdy-gurdy! From this material Normandeau builds a flickering, swaggering wall of Northern Lights; Aurora Borealis shining its wondrous veils over snowy expanses of a midwinter Lapland with no sun but lots of other stars that shine through the blistering cold. This Normandeau work is a beautiful as ever, and illusory in the sense that you may get an impression of fast motion one second and the impression of a completely static state the next, reminiscent of a car rides across a desert (which I once experienced, from Damascus to Baghdad), when you may feel that you’re not moving at all even though you travel at 75 miles per hour. Normandeau says: “It is a deep listening work that penetrates into the sound.” So it is! And there are wolves in this music, a circle of wolves around the listener, at the periphery of light around his campfire: glowing eyes…

The last piece, on track 11, is Hamlet-Machine with Actors. What a title! Normandeau says: “The music, like the play, tries to express the oppression society exerts on Man, the representation of taboos […]” The sounds are more rough here than in the preceding works, more industrial, coming on in slabs of steel and machinery and enormous forces, while human sounds are clear and loud too, inside this Hamlet-Machine, laughter and moans, shouting crowds, pain and pleasure and dust and smoke: relentless events, unstoppable cruelties – but also the open-space dijeridoos of Australia, implying a spiritual context as well in all this violently physical stasis of flesh and metal. 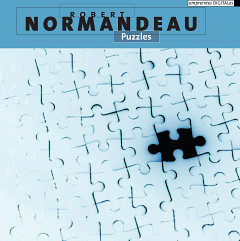 Puzzles
The sound of this Normandeau DVD is amazing! It blows me away!