The Canadian label empreintes DIGITALes releases two CDs with compositions from english composers and performers of electroacoustic music. Mondes inconnus brings together 8 works that were composed between 1995 and 2004. The composer is Adkins. He started in 1993 as a member of BEAST (Birmingham Electro Acoustic Sound Theatre). He received many international prizes for his electroacoustic compositions. So he is someone with a reputation in the circles of electroacoustic music. This is also the case for Pete Stollery who, just like Adkins, studied composition with Jonty Harrison in Birmingham. Also Stollery has his work — mostly electroacoustic music — performed all over Europe and America. On his new cd Un son peut en cacher un autre seven works composed between 1993 and 2003 are presented. Since 1996 both gentlemen established with some others the group invisiblEARts whose aim it is to perform and promote acousmatic music. All this may sound as if we are in highly academic and elitist environment with these two composers. But let me assure you these two composers are absolutely no boring company. In their own way both offer some very exciting and satisfying electroacoustic music. A music that still is very much alife since it was initiated by Pierre Schaeffer.

Especially in the works of Stollery a diversity of concrete sounds can be traced and identified. From this Stollery builts abstract and surrealistic soundscapes. He succeeds in preserving the ‘purity’ of the original sounds, which makes his work very colorful. With a great sense for detail, he composes dynamic and intriguing structures that kept my attention from beginning to the end. I’m not familiar enough with this kind of music in order to discover whether these electroacoustic compositions carry a personal signature. Listening to both CDs I found myself unable in identifying the hand of Adkins or Stollery. In general the works of Adkins are more ambient-like and synthetic, and less whimsical then the works of Stollery. 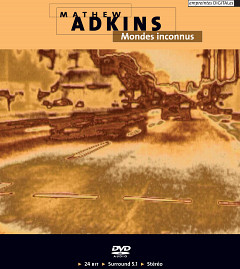