Darren Copeland is a Canadian composer working as sound designer and composer, now also working as artistic director of New Adventures in Sound Art which produces electroacoustic and experimental sound art events in Toronto. This is his second release for empreintes DIGITALes.

empreintes DIGITALes has a reputation of producing electroacoustic music of the highest standards. This is another proof of its status.

This DVD-Audio offers the listener a variety of listening experiences. The music is no longer pressed on CD but on DVD. This allows the label to use much better sound quality (24-bit) and a surround experience. Next to that empreintes DIGITALes gives the music encoded in AAC and MP3 format, for iPod listening.

Let’s first go through the compositions: This disc starts with the coming and going of a sound. It wanders around nervously, it flutters, comes and goes. Slowly, as a listener you become restless also. And then, after a minute or so a human voice becomes perceptible. At first it’s impossible to understand what is being said, only that the tome of voice is very excited. Then a first sentence is repeated again and again (reminded me of The Hafler Trio first release) and fades away again, in the distance. Only to return, break through in your face and then you understand that this is a woman reporting to a microphone on September 11, 2001. Strong entry.

The second work is based on the sound of people whispering. The work is much longer than the first and moves on at a quiet pace. After a short overture the sound retreats and slowly moves on. There certainly is a cadenza, a rise and fall, like the breath of a sleeper. The piece alternates between some fluttering of whispers and a quiet backdrop of harmonics. Whispers of course consist mainly of noise which is a nice contrast with the other more specific frequencies that can be heard.

Third: The Wrong Mistakes. A short work with a funny theme. The sounds, too, are a bit carnivalesque. Whirling about are bell and harmonica sounds. Short, interlude.

On Schedule clearly deals with travel. It’s a 12-minute lasting translation of a trip from London Waterloo Station to Moskva Byelorusski. The length of the tracks between the stops has been translated into the length of the parts in the composition. So far, so good. But what makes it a bit cheesy are glissandi of the organ like harmonics that one easily connects with the accelerating and decelerating of the train. Also the recordings of the train start and stop somehow makes me think that this might very well be an acousmatic composition for children.

Early Signals commemorates the first transmission of radio signals at the beginning of the 20th century. We hear the hoarse voices of Marconi and Eckersly and the clacking of morse signals. A short and simple layering of sound sources.

By far the best composition on this disc is On a Strange Road. It starts as mysterious as its title suggests and continues on this path. We hear the sound of the tires of cars passing but also transformations of these sounds. After a few minutes it sounds as if we have reached a ghost land. In contrast to the On Schedule composition here there is nothing cheesy about the composition. Copeland succeeds in fascinating the listener with coming and going of the different sound sources that he has chosen. Here it’s the sounds of car tires, organs, rain, harmonic electronic sounds (in 2 or 3 different versions), some incidental recordings.

Faith-Annihia does not layer sound sources (only on a few spots) but instead, just like the good old times, collates them one after the other. There are groups of sounds, which are then placed one after the other, fast or slow. The composition itself consists of the rhythm of the alternation plus the filtering of the sounds. Sometimes it’s muffled or very thin (especially at the beginning) at other times the sounds are bright (and therewith louder).

Most of the works presented here are quiet. There are no rough edges, just as we can expect from the releases of empreintes DIGITALes. When it comes to pitched frequencies Copeland prefers the sound of reed instruments (such as mouth organs) which have a rich overtone structure. Most of the works date from 2001 and later, but the last two are 10 years older (1991 and 1992). It is of course interesting to compare these two groups. Indeed, the structure of Faith-Annihia is more abrasive than the works of this century. But the last work, Always Becoming Somebody Else, has a structure that is in line with the latest works. The most important difference is that Always Becoming Somebody Else lacks harmonic sounds. It is built from dark noise sounds that are counterpointed with high pitched squeals. But here too Copeland builds his pieces with the rising and falling of the volumes.

About the DVD-Audio: empreintes DIGITALes presents these works in several modes. The music can be heard through 24-bit stereo files, 5.1 Surround files (which I haven’t heard because I do not own such a set), but also as AAC and MP3 files (320 kbps/48 kHz). So there is a mode for every conceivable situation. I have listened to the files in my car (MP3) and at home in stereo. 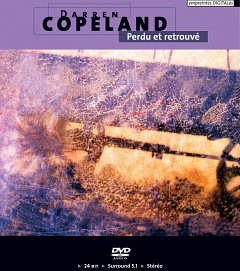