Sometimes, afterwards, I think I was a bit too harsh. When I recently reviewed a couple of DVD (but with music only) releases by empreintes DIGITALes, the final review was a re-run of the previous reviews — as to outline the repeat character of the music. That was, perhaps, not entirely fair. But it make want to listen with much anticipation to the release by Louis Dufort. That was, again, all wrong, as this one, I must admit (and never afraid of admitting when I’m wrong), I quite liked. The differences between this, and some of the precedent releases by the label, are to me clear. Dufort’s interest doesn’t lie in the ways sounds are processed by similar pieces of software which seem to be applying to the other composers, but he rather uses a more roughly shaped compositional method. His sounds are more direct, more in your face, not processed beyond belief as some of the sounds what they are. In, for instance, Matério_***, there are farm sounds, scraping the surface, cooking sounds and clusters of instruments. They all make perfect sense, a fine, balanced audio picture. Sounds do not bounce up and down, back and forth, stumbling and tumbling, but are placed with great care in the right spot. Of course Dufort uses all sorts of computer techniques but as a means, not an end. O.k. so I was perhaps wrong in writing off this label. It doesn’t mean I will necessary straight away applaud everything they do, but this release made up things in an excellent way. 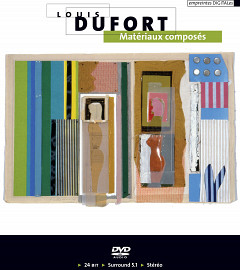 Matériaux composés
They all make perfect sense, a fine, balanced audio picture. Sounds […] are placed with great care in the right spot.