While writing an article on “The Art of Sounds”, a recent documentary on Pierre Henry, I was once again impressed by the power of ballet. Through the symbiosis of sound and dance, the idiosyncratic noises of the French pioneer were suddenly transcended into very concrete, unashamedly emotional, immediately physical and occasionaly even sexual movements. In short, into something a wide audience could relate to. Annette Vande Gorne, whose contact with Henry proved to be pivotal in her development as an artist, makes use of the same mechanism by integrating human voice and speech into her music.

I should actually specify that by saying that Vande Gorne’s music uses the human voice as an orchestra and carefully places spoken word contributions into the texture of compositions with a strong spatial component. In her œuvre, the word comes first and everything else follows in its wake — rather than the other way round. For better judgement’s sake, too, one should replace the term composition with a comparison to radio plays and audio books, subtracting logical causality and adding timbral transfomations, colourful abstractions and surprising juxtapositions.

Quite obviously, then, we are dealing with a highly personal form of expression here, which has found its place in between the arts of poetry and music. A poem by Saint-John Perse is the backbone to the 22-minute wordscape Exil, chant II. Snippets from the lyrics are presented against a fluent backdrop of digital squealing, tortured frequencies, processed sounds of nature as well as pure field recordings of waves breaking against cliffs and bird song. Fragments de lettre à un habitant du Centre leaves aside all concrete references, providing only a touchwood of textural metaphors through which the voice of Éveline Legrand struggles in vain in search for a centre, a focal point and a conclusion.

Vande Gorne never seperates text from context. Her utmost desire seems to be a state in which what is written is transformed into an autarcic world in the very moment it is uttered. In Fragments, this means that every second of the piece is built from samples of the original lecture, with Legrand’s narrative firmly in the limelight. Text, reader and music are inseperably connected. Each version of the piece creats itself entirely from scratch through the parameters of vocal delivery, influencing not only the interpretation of the poem, but also the music accompanying it.

Just as Henry did with patterns of dance, she arrives at a space where several senses are addressed at the same time — and where their interaction awards them a more universal and accesible quality. Through this technique, Vande Gorne is capable of inferring a dadaistic kind of meaning in places where there would otherwhise be nothing but feeling one’s way forward in the dark. She is not making a definite point, though. Rather, vocals in her pieces are like candles, which provide a welcome sense of security in a terrain which often appears alien and impenetrable. What lies beyond their glow, however, is anybody’s guess. 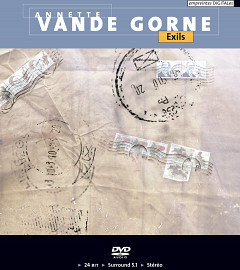 Exils
Quite obviously, then, we are dealing with a highly personal form of expression here, which has found its place in between the arts of poetry and music.