In presence of records such as Jonty Harrison’s Environs one is tempted to leave the leaf totally bare, with the exception of a solitary word: listen. The English composer and director of Birmingham’s BEAST fully deserves to be put side by side with the Ferraris and the Parmegianis of the world, that’s for sure. Few recent acousmatic releases have succeeded in keeping my interest levels persistently high, a program length of circa 76 minutes notwithstanding. Yet it’s right there, on the long distance, that we’re in the condition of sizing up the diverse abilities of those who play in the electroacoustic ground. While most of them need to methodically slice, glue, juxtapose and reinvent their sonic clothes only to sound more or less musty at the end, Harrison focalizes his awareness on the purest elements of life, both from a biotic point of view and the perspective of personal experience. He constructs amazing pieces entirely based on aquatic constituents which, contrarily to many bathed-in-obviousness mélanges, appear psychologically overwhelming to the extent of making us literally feel like drowning (Undertow). Otherwise, he stitches together car engines and other means of transportation to engender a whole range of inner-city rhythms and patterns (Internal combustion). The last track Afterthoughts is built upon “sounds of a suburban garden in early summer”, yet it resembles an alarming sequence of snapshots of disheartening isolation, the human factor all but absent in favour of intimidating roars, sharp clangour and ominous crescendos of insurmountable metropolitan unease. The whole toughened by superlative skills in the assessment of timbral structure and a sense of architectural symmetry that not many names operating in this area can challenge. 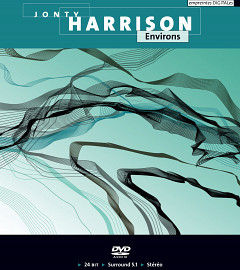 Environs
The whole toughened by superlative skills in the assessment of timbral structure and a sense of architectural symmetry that not many names operating in this area can challenge.