As soon as the sign “Forlì” was spotted on the cover I got curious, as understanding the perpetual attraction of distant visitors for that socio-cultural quagmire called Italy — by far one of the most overrated countries in the globe in every sense, except perhaps the splendour of some of the landscapes and a few historic/artistic sites — keeps making a living as a perplexing matter in my mind. Still, this audio DVD is much more significant than that type of scrutiny, depicting how the shock of war (in this case, WWII) and the might of an everlasting reciprocal devotion often intertwine branches. John Young’s father Alex was in that city in 1944, a soldier in the New Zealand contingent of anti-German allies. Right there he met Tarcisia Fariselli — “love at first sight”, as Alex himself explains — who became his wife, following him after the end of the conflict. The crossroads of these destinies is movingly portrayed by a son who, admirably, devoted a huge endeavour to the circumstances during which his parents began to share a life. In Ricordiamo Forlì, Young utilized their voices, tapes of onsite reports from that era’s transmissions (from the archives of BBC and Radio New Zealand) and extraordinary field recordings of the city, the most frequent being the tolling bells of the churches, which the composer feels as “something permanent, yet alive” communicating a strong emotional message to a man who had listened to these recollections since he was a kid but only in 2002 was able, together with dad, to inhale the air of the place where it all happened. The set’s design, despite its intensely dramatic suggestions, sounds at times like an amazing fairy tale (also due to the essential presence of Franco Bianchini’s narrating voice) as Young magnificently delivers the blend of complementary sensations underlying the account through a vast range of breathtaking sonic structures, so striking that the great amount of spoken word segments never challenges our endurance; on the contrary, one’s impatient to know “what happens next”. The piece emerges as an intense acousmatic journey, utterly worthy of the 1st prize won at the Bourges International Festival in 2007. Another affecting composition for small orchestral group and electroacoustics, Arrivederci, closes the record with a touch of class by the Stroma ensemble, whose responsive reading of the score meshes with the ever-present sound of a bell — processed or less — closing a circle where grieving memories seem to claim the protagonist’s role, even when love is central in the unfolding story. Tangible mournfulness in a next-to-masterpiece oeuvre. 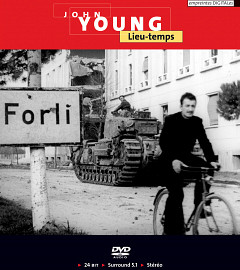