Aimé Dontigny is based in Québec and is certainly a compositor who can’t be easily categorized. He is the founding member of the free noise collective Napalm Jazz, and the animator for the No Type label, which has released his second album. This is a work that brings together a decade of recordings and well-conceived musical projects in seventeen ‘urticant’ and hyper-vivid tracks. The listener is presented with abstract and twisted sounds, a sum of samples, fragments, inspired lucubrations and a very pondered plunderphonic approach. It is a collage of sound involving different genres and different listening dimensions. The record recaptures some historical avant-garde strategies in a timely mix of emotional issues, for example in the surrealist cut-upping. The 20th century avant-garde used to be primeval forms of modernity that are today ‘inflected’ in fruitful experiments, glitches and oblique literary references (not by chance — rather ‘canonical’ references such as William S Burroughs, Anthony Burgess and Guy Debord; representatives of a poetic and antagonist deconstructionism). Geisteswissenschaften is on the sidelines of electroacoustic, electronica and audio-art, and is a compelling work. It is certainly not for everyone, though at the same time the album does not require too many conceptual superstructures. 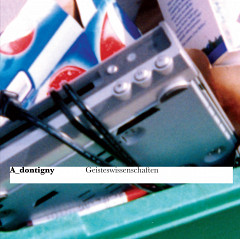 Geisteswissen­schaften
It is a collage of sound involving different genres and different listening dimensions.