The DVDs released by Empreintes Digitales don’t contain images, but highly quality music, to be selected as stereo or 5.1 surround sound. In the past I complained about the lack of difference between the various releases on this label, with some exceptions, but the release by Ned Bouhalassa is something different. Bouhalassa has a background as a composer for films and TV series and is from Montréal. He doesn’t seem to belong the academic world that usually inhabits Empreintes Digitales. He works much more like the others around with loops of sounds, more regular synthesizers but every now and then also throws in some breakbeat rhythm. At the same time he uses field recordings (street sounds, natural sounds) and the length of the pieces is not entirely pop song either. The combination of all of this makes this quite a surprising [disc], a great one for this label. Modern electronics without the pretensions, the same idiom and such like. Nice one indeed. 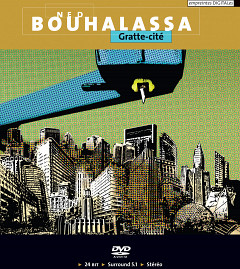 Gratte-cité
… quite a surprising [disc], a great one for this label.