The Canadian label empreintes DIGITALes offers a couple of new releases from award-winning electroacoustic composers, both pressed up as DVDs to offer the listener the choice of stereo or 5.1 surround-sound listening. [Montréal-based] French composer Ned Bouhalassa arranges cut-ups from his huge collection of field recordings on Gratte-cité (IMED 0895), and thereby fancies that he is ‘playing’ entire cities the same way a DJ plays old vinyls dug from his crates. This conceit is reflected in the cover art, where an old-fashioned tonearm is poised menacingly above an imaginary collaged urban-scape and rendered with harsh colours and process dots, like the cover to some non-existent dystopian sci-fi novel.

David Berezan was born and educated in Canada, but studied with Jonty Harrison in Birmingham and is now an established electroacoustic Director at Manchester University. La face cachée (IMED 0896) refers to aspects of his semi-mystical working method, whereby he hopes to reveal “hidden spaces” through his tape-assemblage, thus arriving at the profound revelations of self-discovery. 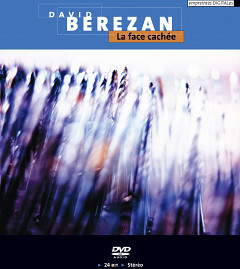