There is an interesting quote on the cover of Chroniques d’une séduction: “since I cannot grasp the meaning of the words, my neighbor’s conversation becomes beat, movement, pace” — that exactly happened to me last night, as I heard voices on the otherwise silent street. I vaguely heard it was about not being able to get in the house, but the finer points of the conversation were lost on me. So I understand more what Tremblay says. He’s a composer and classically trained guitarist and in the three pieces here on his second solo CD show his diverse interests in instrumental music, electronic music and field recordings. It’s on Empreintes Digitales, which guides the listener in a certain direction. Although I think Tremblay’s disc is more interesting than some of the releases I encountered from this label in the last year, also Tremblay doesn’t escape what I think is part of the overall Empreintes Digitales sound: the tumbling of sounds, the pitching up and downwards of the material — be they instrumental, vocal, field recordings or purely electronical. But Tremblay adds a certain element of anarchy to it I think, which makes this throughout more enjoyable than some of the more rigid releases. Children’s voices, street sounds and in some parts of Empathies entropiques even reminding me of Nurse With Wound. Quite a nice work. 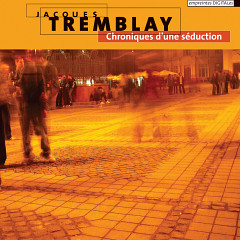 Chroniques d’une séduction
… even reminding me of Nurse With Wound. Quite a nice work.