The drawing gracing the cover of Roxanne Turcotte’s Libellune may convey the message that this album is not cut from the same block as empreintes DIGITALes’ other productions, but it is not that remote from electroacoustic music. Her previous album (going back a decade) had already shown her interest in music that is more soundtrack-like than abstract, more interested in sound quotes and storylines than sculpting masses of sound. Libellune innovates as it is addressed in part to children. The 26-minute title piece pictures a dragonfly’s journey around the world with the help of flutist Michel Dubeau and his arsenal of ethnic wind instruments. Gentle and graceful, it doesn’t trade in fascination for simplicity and because of that stands as Turcotte’s finest work to date. Sons et tintamarre, a suite of short vignettes featuring children voices is less convincing, although the voice manipulations will amuse. The conversation/miscommunication theme that dominated Amore is revisited in two pieces: Y---OW (as in yellow pages) and Micro-trottoir. The latter, an orchestrated collage of street interviews, hardly rises above the anecdote. Dreamier pieces like DMXnébula and Poussière d’étoiles hold more interest and remind us of Turcotte’s studies with Francis Dhomont. The tiny bells at the beginning of the first movement of Poussière d’étoiles lure us into a soundworld that recalls in part childhood wonder but also the more grown-up aspect of tape music. Libellune’s occasional naivete may not please every listener — and it’s not quite yet the album to introduce your children to the genre — but it takes a refreshing stance. 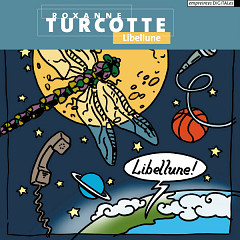 Libellune
Gentle and graceful, it doesn’t trade in fascination for simplicity and because of that stands as Turcotte’s finest work to date.