There’s a strongly academic approach at work in UK-based Nikos Stavropoulos’ first album (perhaps unsurprisingly for someone with a Doctor title). It’s a compilation of eight works dated between 2003 and 2017, each typically between seven and eleven minutes long and each accompanied by their own independent explanatory paragraph that describes or justifies it with reference first to its title, then by the musical process by which it was reached.

Despite being a compilation spanning works over more than a decade though, this still holds together with the consistency of an artist album, because of a relatively singular and persistent approach. Predominantly, this is electroacoustic music with quite a bubbly nature, transposing biological data and rapid but arhythmic organic noises into fragile-sounding synthetic tones. It’s frequently scratchy, but interspersed with occasional thicker and wetter bass noises and rumbling percussive grumbles that add an unpredictable drama. The result is both atmospheric and alien, with a generally intimate, sometimes almost claustrophobic tone.

Pieces like Ballistichory, despite being inspired by seed dispersal, sound organically alive in a way that is unlikely to appeal to anyone with phobias of crawling insects, sounding as it does like angry ant colonies microphoned up while they strategise and attack. Other works like Nyctinasty and Granatum are drawn from very similar source remedies but are a little mellower, despite still being rapid — like a sonic interpretation of what vegetables would sound like if they could tweet like songbirds.

Granicus stands out as an exception, by drawing from ancient-sounding Eastern European and Asian dance rhythms that are contrasted and contradicted against themselves to some degree, but which for the most part hang together as a dramatic piece worthy of a dusty, desert-based, before-the-battle-tension scene for a non-existent movie.

There’s something a little over-familiar about the release as a whole — the combination of wet and bubbly organic grain noises feel a little like an electroacoustic staple and it doesn’t feel like any new ground has been identified with it here. To its credit though it is a polished and accessible example of it, with accompanying texts that serve well as an introductory process for new or sceptical listeners. 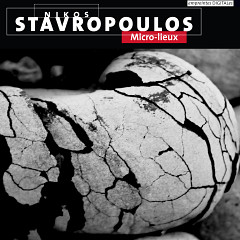 Micro-lieux
Predominantly, this is electroacoustic music with quite a bubbly nature, transposing biological data and rapid but arhythmic organic noises into fragile-sounding synthetic tones.