When you release a record called Rumors of War and name all of the tracks after some of the most horrific battles, tragedies, and massacres of the last century — ranging from 28061914 Sarajevo through 11092001 New York — it’s pretty obvious that you’re not out to offer listeners something light and cheerful. That’s not to say that this second album by Italy’s Metaxu is a completely dark and depressing collection, as there are moments when the duo’s glitchy and orchestral-tinged ambience exhibits a fragile and bittersweet beauty that seems to hold a vague sense of hope, but there is definitely an inescapable air of melancholy running through most of the dozen tracks.

Notable pieces include 25031999 Belgrade, which features a minimal piano melody and string samples layered over a backdrop of subtle pops and clicks, and 01091939 Warsaw, where Metaxu lays down a sound-bed of humming static and a quiet drone loop, weaves in some mournful violins, and closes with a segment of a ghostly sounding radio broadcast announcing Britain’s declaration of war on Germany. But the most affecting segment of all may be the ode to the World Trade Center disaster. This six-minute piece starts with a high-pitched beacon tone over a rumbling ambient backdrop that becomes louder as the track progresses. By the final 30 seconds, the sound eerily resembles that of a roaring jet engine that becomes more and more intense, leading to a sudden bang and then one final, futile tone.

Taken in the context of the thoughts and images of September 11th that remain fresh in most people’s minds, it’s a truly chilling composition, and, like the rest of the disc, it’s a reminder that despite its synthetic and mechanical origins, great electronic music can convey messages and emotions just as well as more traditional musical forms. 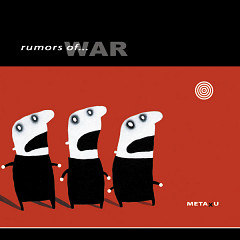 Rumors of War
… a truly chilling composition and […] a reminder that despite its synthetic and mechanical origins, great electronic music can convey messages and emotions…