Sophie Delafontaine was born in Lausanne and studied in Belgium; a gifted child prodigy, she seems to have come into electroacoustic music through the medium of dance and movement. I’m quite taken by her refreshing, near-innocent approach to her work on Accord Ouvert, which showcases six recent compositions. The overlapping voices (speaking and singing) on Ondiesop are absolutely enchanting, and they swim in and out of a collage which involves running water and stabs of digitally reverbed sound. Respire marche pars va-t-en began life as an observation about breathing — and made me think for two seconds we’d be getting a Pauline Oliveros-like observation — but instead it’s about the forward movement of life, which sets up a kind of swing or pendulum. What I like is the way she makes it part of her personal history; did she do the right thing in leaving Lausanne so young? She reflects, honestly, on her own private impressions of what it all means for her, giving the music depth and feeling. There’s also a droney, languid reflection on the restorative powers of sleep in Dormir, aujourd’hui which uses the speaking voice of Laurent Plumhans to deliver fragments of a lecture in among compelling rise-and-fall electronic tones. The distant sound of a cock crowing at dawn in the middle of this one is about one of the most poetic moments I’ve heard in this genre of music. The three other pieces refer in turn to watchmaking and the tiny springs, the rock formations at Creux-du-van, and the work of Ovid as she tells the story of Echo’s metamorphosis. While it’s possible to situate Delafontaine’s work in the traditions of musique concrète and electroacoustics, she clearly isn’t weighed down by the baggage of history. I mean it as a compliment when I think of her as a naive, instinctive composer, one who is not afraid to source her own life in an honest, personal, diaristic fashion. Some of the stodgier buttoned-up composers on this label could learn a lot from her. 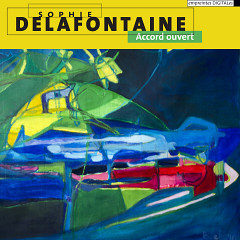 Accord ouvert
While it’s possible to situate Delafontaine’s work in the traditions of musique concrète and electro-acoustic, she clearly isn’t weighed down by the baggage of history.