The work of Todor Todoroff might be a bit closer to architecture and structural engineering than to conventional electroacoustic composition. He’s been working on “interactive systems” for about 25 years now, making ingenious use of sensors which might be used to trigger sonic events. Almost all of the pieces on Univers parallèles are based on gestures and movements which create a sound, whether that’s a dancer on stage doing avant-garde steps, or a painter applying the brush to the canvas, or the action of flowing water. From quite small and intimate movements, large-scaled and mysterious sounds emerge. On Rupture d’équilibre, one of the more dramatic pieces here, it’s done by a pendulum swinging back and forth — or at any rate, a virtual pendulum. Rather than rig up an old grandfather clock, as you or I might have tended to do, Todoroff elected to created a simulation of a pendulum and “played” it like an instrument in a set-up that also included potentiometers (instrument of choice in Stockhausen’s electronic experiments). Interesting methods for sure, though the transformations and distortions that result are not especially bold or unusual, and I found the compositions to be very shapeless and uncertain. However, this Belgian composer has a knack of sometimes turning that uncertainty into intrigue and mystery. 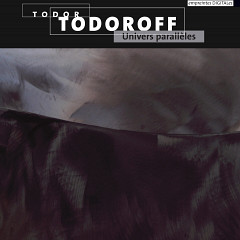 Univers parallèles
From quite small and intimate movements, large-scaled and mysterious sounds emerge.