Like Smalley, Annette Vande Gorne’s compositions probes sound sources such as water to dissolve the walls between inner and outer worlds. As a former student of Pierre Schaffer, and devotee of François Bayle and Pierre Henry, she discovered in electroacoustic music the revolution that her extensive conservatory training had failed to provide, and has since gone on to promulgate it in universities and installations around the world. Illusion epitomises many of the above tendencies, but draws musical performance and spliced sound into tense proximity from the first piece. Driven by the manipulation of what Vande Gorne terms a ‘sound body’, with a seemingly organic flow of disparate sources triggered or mined by the attentive ‘musician’, Au-delà du réel is a polyphonic narrative in which internal and external events become homologous: a freeform current of bells, running water and percussion, swished around the inside of an inverted hippocampus till rinsed of the human artifices of time and logic. Bells are used, not to evoke spatiality, but for their traditional function as a summoning device, for the listener to attend to the quickly changing currents of memory.

Déluges et autres péripéties continues the poetic bent of Vande Gorne’s previous release, Haïkus, by showcasing the work of Belgian poet Werner Lambersy. However, where once drawn to the playfulness of the fixed structure Japanese poems, here Vande Gorne is compelled by the horror of Lambersy’s poem, and its claim that ‘death is the only way for our civilization to be reborn under different auspices’ acting as a troubling reminder that as bad as the present day seems to be, things can still get worse. Thus, Vande Gorne projects onto the droning background of this multi-stage, epic psychodrama a mood of visceral horror in which every manifestation of the human voice is collaged into a multi-vocal sound salad of screams, cheers, cries, shouts, narration and more, like Mike Patton’s Adult Themes spray-painted over Michel Chion’s Requiem.

Finally, Faisceaux appears in two versions, the first fully ‘acousmatic’, the second adding ponderous piano chord progressions that might set ears of Anthony Pateras / Oren Ambarchi fans twitching. The first uses gentle oscillations to pull the ears through viscous air in which a distant piano reverberates into forehead in variations that insistently probe the combination lock to the dreaming mind. The ‘version mixte’ assumes a more dramatic scale, shifting between dense atmospheric dynamics to a point of chaos in which the ‘fixed’ piano enters what sounds like full-blown improvisation, closing with a dissonant, post-Feldman syntax. The complexity of the pianist’s (Ana Cláudia de Assis) challenge of accompanying the electroacoustic section till becoming, as Vande Gorne sees it, a soloist, is belied by the apparent linearity of this trajectory, but Vande Gorne assures us that it is anything but. 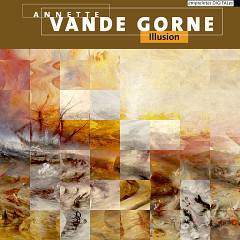 Illusion
… Annette Vande Gorne’s compositions probes sound sources such as water to dissolve the walls between inner and outer worlds.