Like Annette Vande Gorne, another artist that has undeservedly flown under my radar is Åke Parmerud. As I have been recently re-acquainting myself with his music the usual question comes up… where do I start? Well, he has quite a few very strong releases on the empreintes DIGITALes label, so it came down to me engaging in a highly scientific, researched-based, empirical process… I threw a dart. I’m glad his most recent release, Bruit noir (Black noise) was the chosen one since now I’ve been given a hook that will allow me to work my way backwards on future Parmerud installments by way of comparing/contrasting and framing some sort of evolutionary change in style. At least that’s the plan.

Åke Parmerud seems like a guy that someone like me, someone who is “just” the listener, can deeply relate to. In the early 90’s he wrote a paper called Tendencies in electro-acoustic composition [http://www.parmerud.com/downloads/On%20Electro-acoustic%20music.pdf]. I’ve linked to it for two reasons; 1) it’s really short and very easy to digest and 2) in its brevity he identifies, in layman’s terms some commonly held criticisms about electroacoustic music, why they rightfully exist, and measures to avoid them. I’ve personally found his opinions expressed here very relevant as they pertain to the whole electroacoustic space so, please indulge this rather long prologue before I get to the album. (I HIGHLY recommend reading the paper, it’s refreshingly down to earth.)

Paraphrasing, he starts out by defining the terms “sound”, “event” and “object”. “Sound” is the raw material in which music is constructed, “sound event” is an action taking place on a certain timeline, and “sound object” is the representation of a complex process that makes up a recognizable structure which can also be distinguished from other “sound objects”. I see it as one or more “sound events” strung together. It’s all very hierarchal.

“Ever since the art of instrumentation entered the music history, composers have been, to a certain extent, preoccupied with sound in its own sense. But in no music was the sound structure a major compositional means until electronic and concrete music appeared in the late forties.”

Ok, well that’s great, but it’s also fraught with danger as far as the electroacoustic composer is concerned (sorry for the long quote, but it’s salient, bolding is mine).

“I sometime get the impression that some composers really don´t want to be responsible for the sound of the piece at all. If they had the money they would simply compose a structure and leave it to some skilled programmer to put sounding flesh on the bare bones. I do not believe that it is truly possible to separate event structure and sound structure in electroacoustic music. They have to be worked on in parallel, tuned and retuned until the optimal relation has been achieved. Without this relation, the music will not be artistically convincing and of little or no interest to the audience. At least it could not be regarded as sonic art, but rather as an alien form of instrumental music. I do believe that a composer of electroacoustic music must take the full responsibility for creating a complete musical structure where sound and event structures are mutually dependent and inexchangeable. If he can’t handle that, he´s most likely better off composing some other kind of music.”

That all makes waaaay too much sense! I appreciate the straightforward, non-technical language he uses… not something you run into much when reading about this music.

Starting with MIDI technology, Parmerud sees many electroacoustic practitioners concerning themselves, and subsequently getting bogged down with the technically daunting process of making this music instead of the more important “how does it sound” result.

“People in conferences and seminars and festivals will talk for hours about intricate control structures, grammars, fractals, sensors and God knows what, but surprisingly little about sound, art or music.”

“I still believe that a good electroacoustic composition always starts with the composer reflecting on the structural and poetic resources of the sounds from which the piece is to be built. The day composers stops wrestling and experimenting with sound-structures, the term sonic art will have no meaning anymore.”

And the danger comes from the other direction too, as Parmerud points out;

“Unfortunately, sonic art seems to attract some composers who have very rudimentary ideas about composing. All to often a piece may demonstrate some interesting sound material but at the same time be conspicuously void of anything even remotely related to concept, structure, dialectics or poetry. These works simply presents one attractive sound after the other or, if things gets a bit more dense, on top of each other until they eventually disappear into the silence from which they so mysteriously transmogrified themselves earlier.”

Parmerud even goes as far as to hint at what needs to happen (and in my opinion, has happened to a degree) to put the electroacoustic space back on the straight and narrow (bolding mine again);

“We must dare to be more personal, more specific, more unpredictable. We need to build up a new set of sounding symbols and signs that will allow us to communicate with the audience. A new kind of spectral harmonic system, adopted to sonic art, is yet to be invented and investigated. The rhythm of electroacoustic music has to be redefined and reinstalled as a major musical attribute, which will enable us to develop more complex time-relations between an increasing number of layers of sound objects. It is time to leave the mono-linear state and learn how to expand into a multi-dimensional musical space where poly-linear composing will be the electroacoustic equivalent of the traditional polyphony.”

I think Parmerud really speaks the truth here, and he does so in the clearest, simplest, and most logical way I’ve yet to read. I know these quotes are almost 30 years old but, for me, the message they convey is of extreme importance. He chucks into the dumpster the high falutin tweed-jacket-speak and casts away the esoteric, hidden knowledge vibe reserved for the Hermetic few up in the Tower. He talks to us, not AT us!

But what about Bruit noir? Parmerud may be talking the talk, but does he walk the walk? Yes, he does… and you don’t have to go much further than the 33-minute opener, Louder Than Life to hear it. The “polyphony” he talks about is brought out in this piece in the way he masterfully layers sound over other sound.

There are lots of moving pieces within Louder Than Life but all these pieces are in service to the final goal. His pallet of raw sound is vast, but Parmerud isn’t just throwing random events against a black canvas. The piece is split up into 5 movements, and to really appreciate the overarching beauty, I think it’s best listened to in its entirety. Like Francis Dhomont before him, the whole is greater than the sum of its parts and, when looked at in retrospect… the flow of this piece makes complete sense.

Along the way, the listener will encounter enough surprises, mood shifts, undulating sonic landscapes, (some totally alien while others are as familiar as a symphony orchestra), and especially, some uber dramatic tension build-and-release moments with incredible dynamics.

When I was a kid, I used to listen to my King Crimson, Yes, and Gentle Giant albums where I would only pay attention to what one instrument was doing. If I was in a Bruford mood, I would key on the drums, a Fripp mood… the guitar, a Squire mood… the bass, a Minnear mood… the keys, etc. On Louder Than Life, the mind is willing, but the body is weak because Parmerud’s “polyphony” is dialed up to extremely high levels. You can try, and I have… to key on to some of the perpetually shifting currents of sound objects but, as soon as they appear, they poof off into the mists and the brain needs to reset itself again. By then you’ve already missed a couple more easter eggs that were already taking root. This is still a fascinating and rewarding exercise because, experientially, each listen is its own thing.

Bruit noir is a high recommendation for this piece alone, but the fun continues with Raw and Dark Matter, the other two works on the album. Raw is a commissioned piece and was created by “the most uncontrollable software synthesizer I have ever encountered”. Parmerud calls the piece a “composed improvisation” and I thought to myself well, here might be a good test to see if the composer can stay true to his intentions of keeping the “concept, structure, dialectics or poetry” within the music. In other words, is Raw going to come out sounding like the millions of other noodling modular synth pieces I’m starting to get sick of?

Happily, no! (You probably knew that.) Parmerud does something here that surprised and impressed me… he uses restraint. Instead of sounding like some bedroom knob twirling, patch cord shuffling exercise of getting your rocks off with the latest shiny object, the piece is quite reserved, in some spots… sparse. Not only do we have some bizarre and exotic sounds and structures but there is also a sense of narrative… albeit a strange one, no matter how you look at it. The “alien-ness” and controlled randomness of Raw acts as a great “other” to the more composed and organic “Louder Than Life” but then we come to Dark Matter.

The concept behind Dark Matter is compelling, to say the least. Rather than being about esoteric, alchemical knowledge… the Dark Matter in question is;

“… a sonic “matter” that we cannot normally hear, but which surrounds us wherever there are electrical appliances. Microwave ovens, cell phones, computers, light bulbs… all emit fields of electromagnetic energy. These fields can be measured, recorded and made audible using special detection devices. The majority of the sounds in the piece are recordings of these sounds.”

The first time I visited Australia, my initial reaction was one of familiarity. Everyone spoke English, had lawns they needed to mow, there were birds flying, insects chirping, strip malls everywhere. It wasn’t till later that I started to “notice” things. The grass on those lawns didn’t look like the grass I was familiar with, the birds certainly didn’t look the same, don’t get me started with the insects, and the strip malls had stores that sold things made by companies I’d never heard of. Well, listening to Dark Matter I got that sense of the familiar but, upon further review… and knowing where the sounds are coming from, this is truly a different, unfamiliar type of sound. And, keeping true to form… these “different” sounds still manage to flow in a natural manner. It’s comforting in a way, when the mind doesn’t have to be at odds with the music… it makes the experience that much easier and pleasurable.

Dark Matter, like its two other brethren on Bruit noir demonstrates Parmerud’s intent at building a “new kind of spectral harmonic system”. I think the musical concepts used in all three of these excellent works can be used as jumping-off points for further study and future compositions. I’m looking forward to more detailed forays into his back catalog to see how he got there but, in the meantime… Bruit noir did an excellent job of connecting with this listener on a multitude of levels. 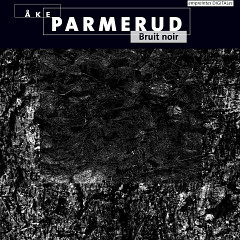 Bruit noir
… Bruit noir did an excellent job of connecting with this listener on a multitude of levels.