Three years in the making, John Oswald’s new digital composition Aparanthesi smirks less than much of this Toronto composer’s notoriously impish output. It soberly blends both electronic with musique concrète, exploring the single note A in two half-hour episodes, during which the As overtones are gently, continually re wrought: a pianos’ open octave gradually becomes a pure sine wave, then gradually a cello, and so on. There’s a foghorn appearance, as well as a moment of monks singing.

Along this timbral journey theres always action, in the form of overtone tinkering; each sound’s fundamentals are re-jigged to evoke new sounds. An attractive spillage of static and the wraith-like remains of sound waves seem to be ever circling the basic aural centre: the mooing of cows becomes the buzz of mosquitoes accompanied by radio static and spinning coins. The compositions two sections illuminate two approaches to two distinct As. The A of aparanthesi A is pitched at 440 khz, the musical tuning A, while the A of aparanthesi B is pitched to 480 khz, which is the electrical tone emitted by toasters, computers, and other normally non-musical appliances.

Both halves of this composition have a comparable fluttery of mysteriousness. The ideas behind their separate points of departure are scrupulously detailed in the disc’s unusually long program notes, wherein the only performance credit goes to cellist Joan Jeanrenaud, whose playing is engineered beyond any meaningful critique. But the recording’s overall soundscape is consistently impeccable, nelther glossy net sloppy, even at very low levels. The tiniest sounds are always leading the listener somewhere. The only flaw in the production is that cranking up the stereo is often necessary when Aparanthesi drops to near-silence.

This is not background music: unless concentrating, casual listeners wili miss about 95 percent of the material, which is often just a patient rustle of overtones shuffled around. But once its audience hones in, the subtly evolving colours captivate. Both sections have a dramatic arc, cast through degrees of sound density (more density creates more material to muck around with) as well as a few well-prepared contrasts. In this regard, those singing monks shine, as does Oswald, who has sublimated his joker’s energy into this work of rare nocturnal intimacy. In a medium saturated with straining academia, Aparanthesi is not only superior in its electro-idiomatic acuity, but it is also direct and unpretentious. 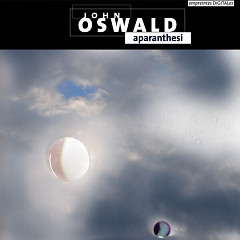 Aparanthesi
… Oswald has sublimated his joker’s energy into this work of rare nocturnal intimacy.