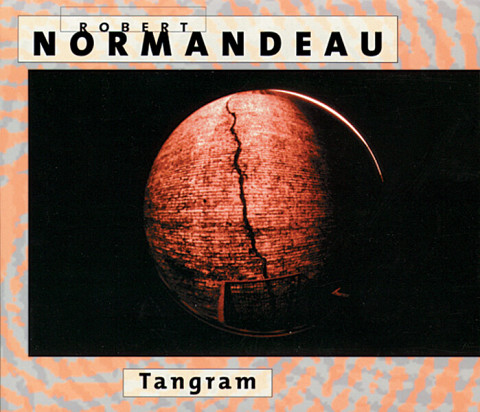 This is definitely a work to play and to savour over and over. — Amazon, ÉU 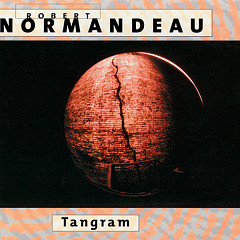 Normandeau freely admits to having been influenced by various other music forms including rock; these influences are obviously audible in most of his works. For example his piece Venture, which was created in 1996, uses as its sole source material the music of Jimi Hendrix, Led Zeppelin, Pink Floyd and other rock artists. Certain pieces on Tangram share some of the common elements which can be derived from rock music, i.e. long determined passages and repetitive rhythms.

Tangram’s first track Bédé (1990) uses onomatopoeia through the voice of eleven–year–old Marie–Helene Blain. The effect is of children giggling, whispering and conspiring together in an ethereal world, tentatively touching the real world like Alice Through the Looking–Glass. Was Charles Lutwidge Dodgson listening to this when he wrote about Alice? Éclats de voix (1991), also uses onomatopoeia through its spoken passage: various sections lead us through processed effects; ghostly mutterings and industrial sound textures which lend a sadness and emptiness to a spectral score, introducing the listener to an elaborate sound world. Spleen (1993), for which the composer was awarded the Main Prize at the Musica Nova 95 International Competition held in Prague, is full of tension built up through a percussive heartbeat, but there is an underlying irritability in the piece like the weariness a traveller may feel at journeys end. An undoubtedly complex work. Track 4 Tropes (1991) contains excerpts from Mozart’s chamber works. Beyond the treated piano and orchestral soundscapes lies a delicate inner core. Normandeau appears to dissect and then reassemble Mozarts music whilst still maintaining the original composers subtle creation of character. The title track Tangram (1992) is at 27:05 minutes — the longest piece on the disc. This powerful piece strains to give birth to the perfect Chinese Tangram, a seven piece geometrical form, finally emerging into fluidity and composure.

Robert Normandeau’s Cinema for the Ear aesthetic lends to his work a depth where meaning, sound and music become one. Either composition on this disc could be placed into a film script, these are soundtracks for the mind, very filmic in structure, and will therefore affect each listener differently creating a personal imaginary element.

I first bought the CD and listened to these compositional works in 1994, found it excellent then and I still find it drives my imagination in the year 2000.

… soundtracks for the mind…

The original 1994 release of Robert Normandeau’s Tangram from DIFFUSION i MéDIA (on the empreintes DIGITALes label) was a double CD edition. It contained TWO copies of the same music: one disc having straight transcripts of the DAT masters, for diffusion use; the other being a recording of the same music diffused into a studio space from an 8-speaker array, better suited for playback over domestic hi-fi. This re-release (in DiM’s new environmentally friendly cardboard OPAK packaging) contains just the latter CD but as the two versions were all but indistinguishable from each other (at least on a domestic hi-fi system), there is little lost for the home purchaser.

The five works presented here showcase the works of Québécois acousmatic composer Robert Normandeau produced between 1990 and 1993, and includes two prize-winning entries in the Noroit-Léonce Petitot International Competition. Éclats de voix (“Bursts of Voices”, 1991) was winner of 1st Prize for Jury as well as Public’s Prize at Noroit 91. The work is constructed entirely from computer-processed samples of the voice of an 11-year old - although this source is, in fact, hardly ever obvious. The exquisite sonorities (representing five childhood ‘states’) that Normandeau wrests from his source are entirely captivating (like most of his work) and the piece is an absolute delight from start to finish. The disc’s opening work, Bédé (1990) is an electroacoustic miniature, of just 3 minutes duration, derived from the same source material but making an interesting contrast with Éclats de voix. The source sounds in Bédé are more discernible for what they are; the piece is also rather darker and gives a somewhat more disturbing view of childhood than that presented in the later work.

Tropes (1991) presents a different face to Normandeau’s work. The starting point for this piece is the chamber music of Mozart. More specifically, recordings of Mozart’s music, here computer-manipulated out of all recognition-not just as originating from Mozart, but even, in fact, as being instrumental music at all-except for a very few short passages. The result is an entirely individual - almost deconstructivist - view of the relevance of Mozart to the modern musician as well as the contribution that he made to the development of western art music. In this work, Normandeau demonstrates his complete mastery of his own chosen art, demonstrating a genius not far short of that of the great master, himself! The final work on this compilation, Tangram (1992) is a purely acousmatic composition. Part of Normandeau’s “Cinema for the Ears” oeuvre, this 27-minute epic takes the listener on an electroacoustic journey through the seasons, “highlighting the elements and materials associated with each.” The work is inspired by the Chinese puzzle from which it derives its name and shows a sonic equivalence to it, utilising simple sound elements to form complex structures, which become recognisable through their very figurative or associative natures. Here we have another entirely captivating auditory experience. Throughout, abstract or barely recognisable sound materials are blended perfectly with more recognisable, richly associative material: the calling of loons, crackling of flames, pulled zippers or the unmistakable sound of freight-train air-horns echoing through the Rocky Mountains above Banff-to name just a few of the more obvious environmental sounds from which this work is built. This is definitely a work to play and to savour over and over.

Like most of Normandeau’s music, this disc deserves to be in the collection of every lover of serious, contemporary music. If you already have it and are looking for more, the release Lieux inouïs from the same company contains almost all of this composer’s works which pre-date the music here. His latest works are featured in DiM’s CD release Figures. Both are every bit as good as this.

This is definitely a work to play and to savour over and over.

Normandeau creates pure adventures in sound. Crackles, animal kingdom sounds, machinery, electronic instrumentation and more flow from one to another. This series of sounds not only commands attention but is sufficiently dovetailed to strike the listener as musical. He refers to his suggestive style as “acousmantic music” in which Normandeau creates “cinema for the ear.” I can attest to his success in inspiring mental images as effectively as other music creates moods. Like the well-known Chinese puzzle, the composer puts together superficially incongruous sound-shapes into arresting and imaginative aural sculptures. (4.5/5)

Academic electronic music can be so cold at times, so calculated and intellectualized, so academic! The pleasure of Tangram is that the music it contains is so human. Part of the reason for this lies in the fact that Robert Normandeau creates his music entirely from acoustic samples (often human voices), thereby giving his music an innate organicism. Another reason is that each piece on Tangram is aurally cinematic in the sense that each tells a story — which is refreshingly human in a century like ours where the trend in ‘serious’ music has been decidedly anti-programmatic. Finally, there is Normandeau’s recording technique, which aims to recreate a live-concert-type atmosphere. Rather than mix his works electronically, he ‘mixes’ them acoustically by routing each track to a speaker and spacing the speakers in different configurations in the studio. Thus each ‘mix’ is actually a distinct capturing of the sonic diffusion created by a given speaker setup. If you want to hear what this adds up to, Tangram has two ‘mixes’ of each piece so that you can compare and contrast. Mr. Normandeau is to be applauded for creating such inviting and sensitive electronic music.

Mr. Normandeau is to be applauded for creating such inviting and sensitive electronic music. 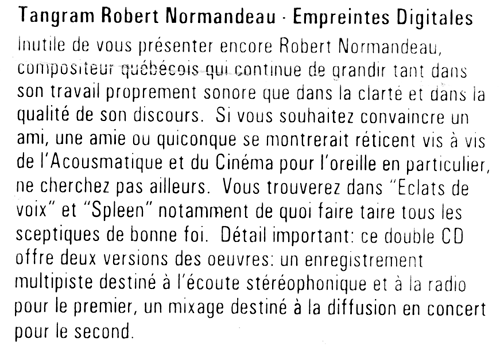 Lieux inouïs (Unheard-of Places) by Québécois composer Robert Normandeau reminds us of Neil B Rolnick’s Sanctus from Bridge Records [PNMR Vol. 1, 5]. Working with completely different aesthetics, two composers with nothing in common have coincidentally created similar sounds from classical sacred music. Like a lot of French Canadian music, the Normandeau CD is narrative; almost programmatic, following a natural and extremely sophisticated progression. And like a lot of American music, the Rolnick CD is abstract, occasionally funny, and mostly non-linear. But Rolnick pales in comparison compositionally, and surprisingly enough, technically. Both composers use tape samples (analog, not digital) of classical music. In Normandeau’s disc. the cited music is mixed with environmental sound, much of it readily identifiable. For instance, Jeu (Game), an electronic tour de force, uses a mélange of nostalgic references to Paris (sounds of the Metro, ÀOrly airport, construction noise) and organ anf choral music. As the listener is swirled into the inexorable movement of the piece, the places (lieux) become almost miraculously tangible. Impressive and intriguing.

As the listener is swirled into the inexorable movement of the piece, the places (‘lieux’) become almost miraculously tangible.