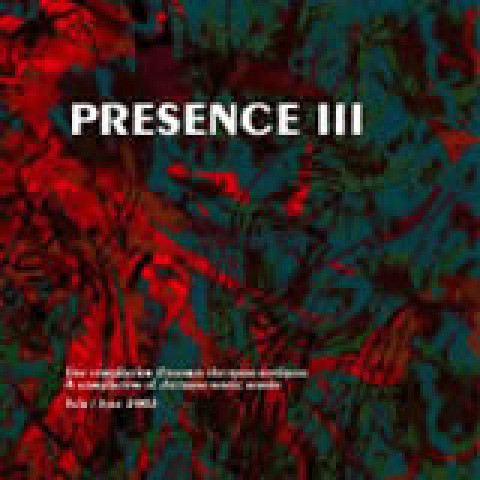 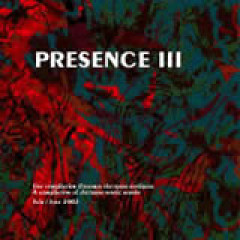 Présence III is also about absence: the 29 snapshots on this two-disc set can only give a flavour of any one artist’s oeuvre and one piece per artist (with the exception of the two from Martin Alejandro Fumarola) does not guide the ear to the absent works. While the sleeve notes make the justifiable claim that the pieces ‘give evidence to the breadth and depth of artistic practice within our community’, the problem, for me, lies in the process of selecting examples which best represent this breadth and depth.

The pieces are arranged on the discs in alphabetical order by the composers’ surnames, creating arbitrary collisions of style and genre. That’s no bad thing as it resulted in the happy accident of Kristi Allik’s Machine Symphony being presented first. This extract forms a slow arc of granular accelerandos and drones using material derived from machine noises. It’s familiar territory and there are no aural surprises but, despite the clumsy fade-out, the track forms a solid prelude to the rest of the disc.

James Bentley’s double exposure has a greater range. Here is a more flamboyant display of sonic fireworks: cracklings, buzzings, bursts of white noise circling the head, snatches of speech: all mostly locked in place by a whistling continuum. However, there is a pervading sense of arbitrariness which tends to irritate rather than astonish - although there are some exquisite sounds here.

James Caldwell’s Mechanism II is similarly arbitrary in terms of its perceivable structure: slow accumulated chords are played out in shiny synthetic timbres punctuated with plucked string sounds. The sustained notes are swung gently around the head while the plucks give some gestural cues to an otherwise lifeless piece. Although it operates within a sharply defined sound-world, it really does sound like it’s been scored for a bad made-for-TV thriller.

So I held my breath for Grant Chu Covell’s Octet with Puzzle which also had, to my ear, a predominance of rather weary synthesised sounds. However, these sounds were offset with segments of speech and a shifting, overlapping pattern of recorded (?) percussion which is really quite engaging. The piece has a lively character - a refreshing change from the all-too-familiar reliance on sustained drones - and is quite daring in a field where changing timbres slowly is a predominate mode of expression. However, I felt a need for greater richness in the pitched tones – a richness hard to achieve using classical synthesis methods.

Rhythm forms the strongest motivating force in the excerpt from Thomas Gerwin’s Fontaine de Vaucluse. One of the sounds, which were recorded at the spring of one of the deepest sources on Earth, is aggressively looped to form a snare-like pulse undulating in counterpoint to other loops of water noises. The effect is of an unstoppable engine and forms, in some respects, an inversion of Allik’s piece where machinery is made to take on the flow of natural phenomena.

Disc 2 opens with Mirror of Time – so called because of the forward/retrograde rhythmic patterning deployed. A nice piece which may benefit from being transcribed for chamber ensemble as the sounds largely emulate (sampled or synthesised?) natural instruments with little or no modification. Oboe, bassoon, piano, pitched and unpitched percussion, plucked strings are all present playing repeated staccato notes in varying registers. A bright, cataclysmic moment in the middle slowly dissolves into the sparseness with which the work opened. A simple, taut argument.

After Adrian Moore’s sinewy assault on my loudspeakers complete with its audacious interjection of sampled accordion playing, Rick Nance’s thoroughgoing investigation of ‘various shapes and masses of different metals… as they radiated summer heat into a block of frozen carbon dioxide’ presents some scintillating sounds, leaving me with a desire to know more about the techniques: his website gives away little of his alchemy.

The problem of making synthesised tones engaging can be neatly side-stepped by working with acoustic instruments, live or recorded, additively or reductively. Richard Zvonar and Robert Black do just that with Massif for solo double bass and multi-channel recorded basses. A slow crescendo of buzzing, bowed strings builds to a frenzy, until the tension drops to allow for cascades of pizzicato to come to the fore, then builds to another peak. At around six minutes we are offered some layered cadenza-like passages, with their promise of virtuosity, which congeal to a terrifying roar and chatter, as if the entire animal kingdom had been sent into panic. It seems never to end until a faintly nostalgic, floating, singing passage brings this extraordinary piece to a close. At times I was reminded of why I once enjoyed Xenakis’s music with its massed strings playing glissando, but parts of Massif offers more – possibly because it is less restrained, less bound by its own conventions: a really satisfying close to this compilation.

As for the ‘breadth and depth’, this compilation gives a flavour of the range of styles one might encounter in the world of electroacoustic music and it presents us with various degrees of adherence to the language of ‘conventional music’. As such it is a good taster but I would have liked to have heard fewer artists presenting more pieces. Nevertheless, there is much to enjoy on these two discs.

Volume 3 in the Canadian Electroacoustic Community’s Presence series came out in June 2002. Once again a 2-CD set, it presents 29 works by as many artists. These composers are for the most part rarely seen on record (only Laurie Radford, Adrian Moore, and a couple more have full-length releases available). The series’ intent is to give exposure to the work of CEC members, not to produce easy-flowing albums. The listener is meant to dive in, take what he wants and retreat. That explains the alphabetical track list, but the CDs can still be listened in full with some enjoyment. The music ranges from musique concrète to sound synthesis and environmental recordings. Half of the tracks last between 3 and 4 minutes. The others are either slightly shorter or longer, none going over 9 minutes. Beside one piece by Martin Alejandro Fumarola dating from 1989, all works are recent. Stand-outs include James Bentley’s Double Exposure, academic but very well done; Ian Chuprun’s I Was Very Safe… In My Dream, a disturbing juxtaposition of children talking about their dreams (and their mother’s lie: Daddy’s microphones aren’t turned on) and adults laughing at a party; David Hirst’s Mon Dieu, where tennis, boating and religion come together; David R Mooney’s ambient The Llama Strut; and Steven Naylor’s Irrashaimase, a beautiful reminiscence of urban Japan.